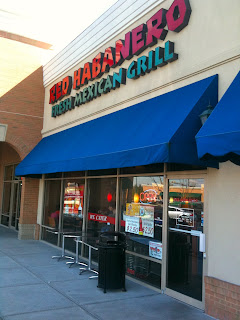 On the recommendation of a friend, I recently tried lunch at Red Habanero, a local place that is trying to emulate the success of Qdoba and Chipotle in the fast-food burrito game. The location I visited is in a strip mall on 96th Street in Fishers, a northern suburb of Indianapolis. Both on the outside and the inside, the place looks like one of its two national rivals, utilizing a similar walk-up-and-order set-up. The only difference is, the design, logo, signage, etc. all seem less professional at Red Habanero.

As I entered the restaurant, my nostrils were assaulted by the smell of some sort of industrial-strength chemical cleaner, which gave me an instant headache. At least I could assume the place was clean! Because my friend and I arrived around 1:00 (kind of late for lunch), there was no one in line. Unfortunately, that did not mean we were going to get in and out quickly. Instead of taking our orders, the two employees chose to busy themselves with cleaning (hence the smell) and prepping chicken. Around 10 minutes later, one of them finally came to see what we’d like to eat.

I decided to get a shredded beef burrito. The guy warmed my tortilla (just like at Qdoba and Chipotle), asked me what kind of beans I wanted (just like at Qdoba and Chipotle), and then asked me to point to whatever other ingredients I wanted in it (just like at Qdoba and Chipotle). So far, so good. When I got to the cash register, though, I noticed he rang me up and then hit the $0.50 button an extra two times. I asked him why I was just charged an extra dollar and he said that I asked for two extra fillings. I explained that I was not aware that I had asked for extra fillings, at which point he told me that I only got four filling choices and any more were an extra 50 cents apiece. Then he grimaced and pointed to a tiny 4”x4” sign that he claimed should have warned me. I gave up and paid him the $9 - a couple of dollars more than I would have paid for a similar burrito at Qdoba or Chipotle.

When I got to my table, I noticed that the staff had gone to the extra step of grilling the outside of my burrito, removing the pillow-y texture of a tortilla and replacing it with the texture of brittle sandpaper instead. Having not asked for the burrito to be burned on the outside, I was a little surprised. As I bit into the wrap, I noticed that it now tasted like a “Grilled Stuft Burrito” from Taco Bell – certainly not a good sense memory to invoke if you’re trying to serve authentic Mexican cuisine. As an added bonus, the guacamole in the burrito was all in a clump at one end instead of spread throughout. Given that the guacamole tasted sour and spoiled, though, its positioning actually turned out to be a good thing. I didn’t care for the taste of the shredded beef either, so I choked down half of the burrito and tossed the rest away. The burrito also came with chips (perhaps that’s how they justify the rather high prices?), but I am not a big chip fan, so I tossed them, too. Wish I could have traded the chips in for a dollar off or something….

So, overall, this was a very bad dining experience, indeed. The staff was rude, the food was bad, the price was high, and the atmosphere was not-so-great. I’m usually a defender of local businesses, but this place just can’t compete with the two national chains that do this sort of food much more quickly, cheaply, and tastily. I definitely won’t be going back to Red Habanero. In fact, I’m thinking I might need to cut ties with the friend who recommended this place to me in the first place! I’m kidding about that last part. Kind of.