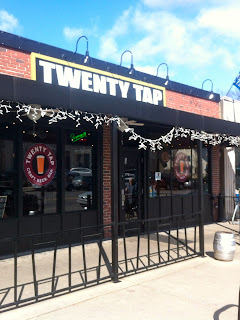 As the number of breweries in Indianapolis has ballooned over the past few years, pubs like Twenty Tap have (thankfully) sprung up so beer aficionados can sample many local and regional brands in one place.

For my money, Twenty Tap is a cut above the rest. First off, the name is a misnomer; the restaurant actually offers 38 local and regional beers on tap. Way to undersell yourself, Twenty Tap! With such an embarrassment of riches, it can be hard to know where to start drinking. Perhaps that's why Twenty Tap offers a beer of the day for just $3.50. (On Tuesdays, all beers are $3.50, so you've got to find your own starting point on those days.) Or, if you feel like maximizing your sampling opportunity, you can always order a flight of three beers instead.

On my recent lunch visit, the daily beer special was New Holland Mad Hatter (a Michigan brewery). An IPA didn't sound appealing to me on that day, though, so I chose a Belgium blonde from Indy's own Bier Brewery instead, which hit the spot.

So, Twenty Tap's selection of beer is good! But how's the food?

Well, it's good, too! The menu isn't particularly flashy (consisting of pub favorites such as burgers, sandwiches, salads, and so on), but what they do, they do well. For example, they offer a variety of gourmet burgers with creative names like "Wrath," "French Breakfast," and "Bonfire"—all made from locally raised Fischer Farms' beef. 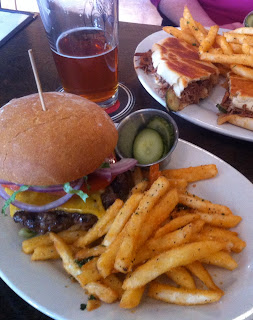 For my meal, I decided to keep it simple and go with their "Classic" burger, which comes dressed with lettuce, tomato, onion, and cheddar cheese. For my side, I chose fries. My friend (a regular at the place) selected the pressed Cuban sandwich (ham, pulled pork, Swiss cheese, mustard, mayo, and pickles) also with a side of fries. Twenty Tap makes a variety of aiolis for dipping, so my dining partner suggested we try a couple of those as well; I chose blue cheese and she got chipotle.

Neither of us were disappointed with our meals. My burger was great, cooked medium and not overly salty (which I find to be a problem at many burger places). The fries were crispy and well seasoned, and the blue-cheese aioli really pushed them over the top into scrumptiousville.

As my friend scarfed down the last of her Cuban, she mentioned that Twenty Tap is also a surprisingly good place to take kids (she has two). She said the restaurant has a full kids' menu and provides crayons and coloring sheets to keep the little ones occupied. Plus, she added, if her kids get a little rowdy when she's there, she doesn't particularly care because she's been drinking. Now that's responsible parenting! 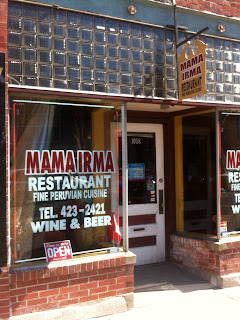 I don't know why I had resisted eating at Mama Irma's, the Fountain Square restaurant that prides itself on serving authentic Peruvian food, until last week. As someone who loves food and lives nearby, I should have been there on opening weekend a year and a half ago. I think memories of the past "Peruvian" food I'd tried held me back. I'd just never had a good experience with the cuisine. Well, that's all changed now, and I really wish I had tried Mama Irma's earlier!

As soon as my friend and I entered the small but brightly painted restaurant, we felt right at home. The owner of the place, Hilda Cano, greeted us and then showed us to our table, laughing and joking along the way. Hilda is friendly and warm, and the enthusiasm she has for her Peruvian culture and the recipes she learned from her mother (the titular Mama Irma) is infectious. I felt like I had just stepped into her house as a welcome guest.

After scanning the menu—which includes appetizers such as potato cakes and stuffed avocados, a variety of salads, lots of seafood (including ceviches), plus quite a few steak and chicken dishes—I felt spoiled for choice. Of course, Hilda was happy to give me a few suggestions! She went into great detail on the many delicious ways the kitchen could prepare the fresh flounder, the special fish of the day. She was even open to adjusting any of the dishes to my taste. 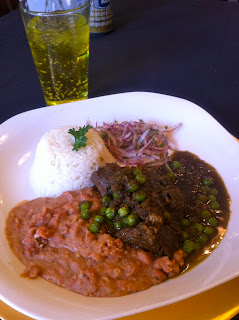 Ultimately, I ordered the seco de res, a cilantro-base beef stew served with white rice, beans, and onion salad (although I was intrigued by a pasta dish that was described as "chicken lo mein Peruvian style").  To really get into the Peruvian spirit, I decided to pair it with an Inca Kola, a bright yellow drink that tasted like a lemony cream soda.

My friend ordered the ceviche mixto with shrimp for his meal. Having ordered the ceviche at Mama Irma's in the past, he requested it mildly spiced; he had ordered it hot before, and it was a little too hot for his taste. He also ordered a glass of the homemade chicha, a drink made from purple corn, pineapple juice, and spices.

Let's cut to the chase: I loved every single thing I tried.

My seco de res was amazing! The stewed beef was incredibly tender and perfectly seasoned. I hate to write that it "melted in my mouth," but, well, it kind of did. Hilda even took the time to show me the proper way to eat the dish (you've got to get a little bit of each thing—the beef, the onions, and the beans—on the fork all at the same time for each bite). The ceviche was the best I've had in ages, fresh and citrusy as ceviche should be. It was served with hominy, yucca, potato, and some pan-roasted corn (basically homemade corn nuts). Even the chicha, which was a slightly off-putting shade of purple, was surprisingly tasty, sweet but not overpoweringly so. I kind of wish I had ordered it to drink instead of my Inca Kola, actually. 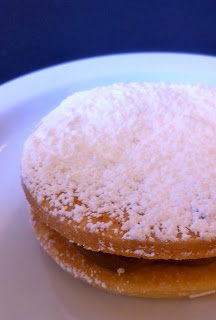 Just as I was sitting back to rub my full belly, Hilda mentioned dessert. I didn't even notice the dessert list on the menu, but as soon as she described her world-famous, made-in-house alfajores cookies, I was sold. She said that customers have driven from as far away as Toledo just to get them. When she brought out my cookie, I was not disappointed. It was basically a light sandwich cookie that tasted like two very delicate shortbread cookies with dulce de leche in between and dusted with powdered sugar. If only I'd had a glass of milk with it.

Just thinking about Mama Irma's has got my mouth watering. Let's see, I don't think I have any dinner plans...