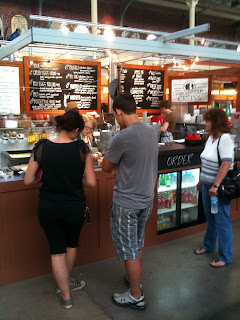 The good folks behind 3 Days in Paris have been whipping up Parisian-street-style, hand-held, sweet and savory crêpes at farmers’ markets across the Indianapolis area for over a year now. Lucky for us downtowners, they finally opened their first permanent location inside the central atrium of the historic City Market this past February.

The menu at 3 Days in Paris consists entirely of crêpes—but they offer a wide variety of the very thin pancakes. Some of the savory varieties include Green Eggs and Ham (egg, ham, mozzarella cheese, spinach, and pesto), Buffalo (chicken, buffalo sauce, bleu cheese, mozzarella, celery, and ranch dressing), and BLT (bacon, spinach, sun-dried tomatoes, and jack cheese). If you have a sweet tooth, they also make crêpes stuffed with things like Nutella, bananas, apples, and so on. Or, if none of those appeal to you, you can even create your own.

At my recent visit, my two friends and I decided to try as many different varieties as possible. To that end, one of my friends ordered the Pic Nic (chicken, BBQ sauce, bacon, jack cheese, onion, and cilantro) and the Black & Blue Moo (beef, blue cheese, mozzarella, onion, dried cranberries, spinach, and roasted raspberry chipotle sauce). Yeah, he’s a bit of a pig. My other friend got the Market St. (mushroom, onion, sundried tomatoes, red bell pepper, cheese, buffalo sauce, celery, and spinach) while I opted for the Harvest (ham, apple, dried cranberries, havarti, spinach, and roasted raspberry chipotle sauce).

After we placed our orders, we waited. And waited. Be warned that this can take a while if you get at the end of any line whatsoever. When I was there this past week, for example, they were only running two hot plates. Given that each crêpe takes several minutes to cook, they can get backed up very quickly. I waited at least fifteen minutes for my crêpe, which is pretty slow for lunch. Still, if you're not in a rush, it’s kind of fun to watch them swirl the crêpes. 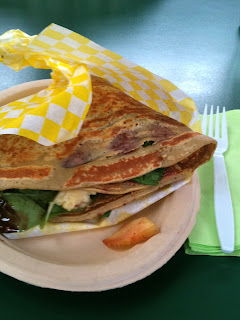 And, thankfully, the food was worth the wait. And cheap! The crêpes cost (at the most) just $6.50 apiece. And they are extremely filling, large and stuffed with high-quality ingredients. In fact, my friend who ordered two couldn’t finish his second one. None of us had any complaints. I wasn’t totally sold on the apples in mine, but they weren’t a showstopper. Next time I’ll be ordering the Pic Nic, though. That one looked amazing.