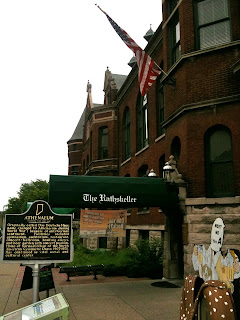 The Rathskeller, located on Michigan St. just off Massachusetts Avenue, is a downtown Indianapolis landmark. The restaurant, housed in the historic Athenaeum Building (which was originally called Das Deutsche Haus and partially designed by Kurt Vonnegut, Jr.’s grandfather), has been serving up German food since around 1894. Frankly, the restaurant’s lucky it’s got tradition on its side; the atmosphere and sense of history here are truly amazing, but the food is rather lackluster.

My most recent visit was at lunch. After being seated by our friendly and good-natured server, I sat back to study the menu, which is fairly similar to the more expansive dinner one. Whether lunch or dinner you’ll find many of the standard German dishes such as sauerbraten, German potato salad, schnitzel, potato pancakes, bratwurst, and so on. For those who don’t like German food, there are also a surprising number of other options such as chicken salad sandwiches, tuna melts, pork tenderloins (a Hoosier tradition), French bread pizzas, and pasta dishes as well as an assortment of soups and salads. At lunch, they bring you a complimentary pretzel with a side of really spicy mustard. This was delicious—and my friends and I had fun daring each other to eat large amounts of the mustard.

Before we ordered food, I decided to give their beer a try. Being a German restaurant and a bar, naturally they have an impressive selection of beers from all over the world. The list really is staggering! Because I couldn’t decide on just one, I ordered draught samples of the restaurant’s “Original Six” varieties: Rathskeller Amber, Spaten Lager, Spaten Optimator, Warsteiner Pilsner, Warsteiner Isenbeck, and Weihenstephaner Hefe Weisse. 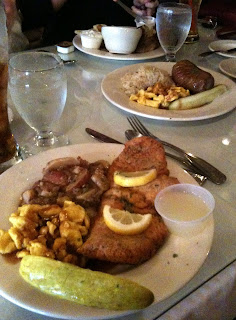 As for the food, the four of us decided we’d all order something different so we could try a bit of everything. The four dishes we ordered were kassler ripchen (a pork chop topped with a sauce made of apples, raisins, walnuts, and herbs), rouladen (a beef rollup filled with bacon, onions, mustard, and a pickle wedge topped with brown gravy), schnitzel (a breaded pork cutlet topped with lemon slices and served with a lemon dipping sauce), and—so we could try something non-German—fish and chips. The German dishes all came with sauerkraut and German potato salad (although I substituted spätzle noodles for my sauerkraut).

So how was it? Well, the beer was excellent! As usual, though, the food was just okay. The rouladen was everyone’s favorite because it was nice and flavorful. How could it not be? It contains a pickle, bacon, and mustard! The kassler ripchen was fine, although it was basically just a pork chop. Nothing too special. The schnitzel was shockingly bland, rather tasteless for a breaded and fried piece of pork. The spätzle noodles were tasty, though. As for the fish and chips, it was fish and chips. ’Nuff said.

Even though I’m never blown away by the food at the Rathskeller, I find myself going back a few times a year to soak in the atmosphere and drink some good beer. If you’re in Indianapolis for a short time, the restaurant is certainly worth a visit—to see what the city was like at the turn of the 19th century and raise a pint, if nothing else. In nice weather they even have an awesome outdoor biergarten that includes two bars and a band shell that often hosts live entertainment in the summer.