Tortas Guicho Dominguez y el Cubanito: The name’s a mouthful – and so are the sandwiches!

As a resident of the Fletcher Place neighborhood in downtown Indy, I make it my business to check out any and all restaurants that open in my neck of the woods. Tortas Guicho Dominguez y el Cubanito, located at the intersection of College and Virginia, has been open for just around a month now, and I finally got around to giving it a spin last week. (By the way, for those of you not in the know, a torta is a Mexican-style sandwich.) All I can say is, “Welcome to Fletcher Place, Tortas Guicho Dominguez y el Cubanito!” 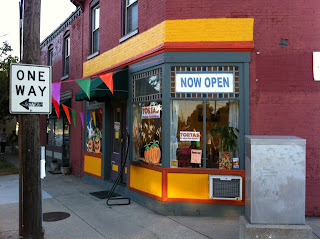 As soon as you see this restaurant, you know it’s going to be fun. The exterior is painted with bright yellows and oranges, making it stand out against the rest of the red building. The colors carry through to the inside as well, where dance-y Spanish-language tunes greet you. The restaurant itself is small. Some might say cramped, but I prefer cozy. The owners are friendly and make you feel right at home, like one of the family. When you sit down they bring you a dish of spicy peanuts to snack on. They also bring bowls of salsa verde and pickled jalapeños, but those are to be used as condiments for whatever tortas or tacos (yes, they have tacos, too) you order. 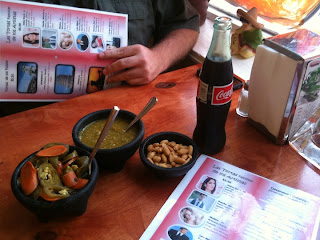 Half of the tortas on the menu are named for famous people and the other half for countries. From the famous people’s side of the menu, we tried the Shakira (breaded steak, chorizo, and mozzarella cheese) and the Luis Miguel (ham, chorizo, and mozzarella cheese). I had heard of Shakira, but I had no idea who Luis Miguel was. (A quick glance at Wikipedia tells me that he is a Mexican singer, producer, and songwriter.) From the countries’ side we tried the Cubana, which contains basically every item on the menu including a fried egg, a hot dog, and three kinds of cheese.

All three were delicious. All tortas include tomato, avocado, and jalapeños, unless you don't want any or all of those things. They are served on huge buns that are baked fresh every morning at a bakery on Washington St. As I said, they were all awesome, but the Cubana was my favorite. One of these suckers is more than enough! The melty cheese combined with the various meats and the egg and the avocado was simply amazing. I’m craving one right now! Even the hot dog (which is split down the middle and grilled) added to the deliciousness of the sandwich.

A cold beer would have been awesome with one of these spicy tortas, but the owner told me that they have no plans to serve alcohol. She said that some diners actually order their sandwiches, run next door to the Dugout tavern for a beer, and then come back to eat. Speaking of beverages, there is one other bonus to eating here – they serve bottled Mexican Cokes that are made with real sugar instead of corn syrup. Yum.

When I asked about the menu and why they decided to name some of the sandwiches after famous people, the owner explained that she and her husband used to own a torta shop in Chicago where famous folks actually used to eat. She hopes to cultivate that clientele here as well. Her first target is Helio Castroneves. If Helio knows a good sandwich from a Dancing with the Stars reunion show, then he’ll get his butt to Tortas Guicho Dominguez y el Cubanito ASAP! C'mon, Helio. Do it for the children.