I just don’t get Scotty’s Brewhouse. 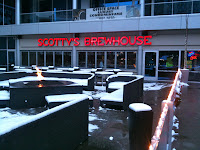 There are so many things I don’t get about Scotty’s Brewhouse that I’m not sure where to start. First off, why are diners provided with rolled-up bathroom face towels instead of napkins? (That’s just gimmicky and weird.) Why is their menu designed to look like a fake issue of Sports Illustrated magazine? (The thing contains way too many pages for way too few items of interest. Where am I? The Cheescake Factory?) Most importantly, why in the world would Indianapolis need another boring restaurant/bar? (Within half a mile from Scotty’s is Alcatraz Brewing Company, The Ram Restaurant and Brewery, Champps Americana, Rock Bottom Restaurant and Brewery, Jillian’s, Kilroy’s Bar & Grill, and even a freakin’ T.G.I. Friday's.) After eating at Scotty’s this weekend, all of those questions remain unanswered for me.

I have to admit, I got a bad feeling as soon as I entered the restaurant and saw the hostesses standing around wearing t-shirts and headsets and looking bored. I felt like I had stumbled into an Old Navy. The giant, flatscreen TVs covering pretty much every surface didn’t help, either. When one of the hostesses finally asked me how many were in my party, I told her and requested a booth. She began to lead us towards our table, which was situated directly beneath a bank of suspended TVs blaring a basketball game and right beside a large table full of rowdy sports fans. Because I don’t really care about basketball, I asked the hostess if we could sit a couple of booths down from the one she had assigned us so it would be quieter. “It’d be easier for us if you sit where we want you,” she replied. Well, by all means, make things easier on yourself! So much for customer service. Playing along, I shut up and sat where she wanted me. As soon as I slid into the booth I noticed that an overhead light was shining down on my face, blinding me like a spotlight. Now I couldn’t hear or see. At least I could still taste.

With that thought in mind I cracked open the complementary sports magazine – er, I mean the menu. After flipping through its 30 pages, I realized that they mainly offered the standard wraps, burgers, and salads. Also, they call themselves a brewhouse, but they don't actually brew any of their beers. Having said that, though, they do have an extensive list of bottled and draft beers, including quite a few from local breweries, which is nice. On the front page of the menu, the Scotty’s staff helpfully spotlighted their three signature items – their dill pickle chips, their “mo’fo’” hot sauce, and their Shewman burger (dressed with jalapeños, cheddar cheese, bacon, and peanut butter). The Triple XXX in West Lafayette has been putting peanut butter on burgers for years, but I’d never gotten up the nerve to try one. Tonight was the night, I decided! In fact, we decided to order all three signature items just to give Scotty’s a fair shake. 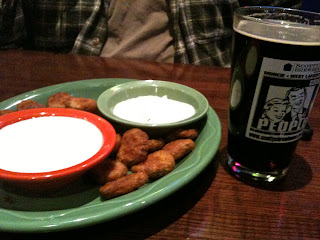 The dill pickle chips came quickly, which was good, but they were really, really greasy and slightly overcooked, which was bad. I wanted a paper napkin or something to try and press some of the grease out of those suckers, but all I had was my enormous face towel. Needless to say, I didn’t really care for the pickle chips (too salty, for one thing), although the horseradish dippin’ sauce was quite nice.

Next came our burgers, the atomic mo'fo' burger and the Shewman burger, both with tater tots. I tried the atomic mo'fo' burger, and thought it was just okay. The mo’fo’ sauce did not impress me. It was more sweet than hot. Much to my surprise, my burger was delicious, though! The peanut butter paired really well with the spiciness of the jalapeños, cooling them down. Who knew? Well, I guess the Triple XXX did…. The tots were good, too (I’m a sucker for tots), crunchy and golden brown. They were especially tasty with the horseradish sauce (which I’d held in reserve from the pickle chips).

Overall, I just don't see what this place offers that a million other restaurants don't already offer. The interior is obnoxious and loud, the food is just okay and not very original, and the staff is hit-and-miss. The one bright spot was our server. He was very good, even offering to bring us samples of beer to taste to help us make our drink selections. I suppose if you’re really into sports or just like the kind of place that has a mini TV in each booth and an ATM in the entryway, then this might be the restaurant for you. It’s just not for me. I’m not saying Scotty’s Brewhouse is terrible; it’s just shockingly average. I may start putting peanut butter on my hamburgers at home, though, so that’s something.