Now, which El Rodeo is this again? 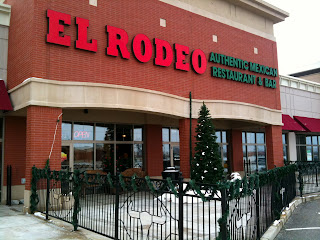 It seems like there are a hundred El Rodeos scattered across central Indiana – and, indeed, the country. I can’t figure out if they’re all part of one large chain – a kind of Mexican McDonald’s – or if they’re independent restaurants that just happen to have really unoriginal names. In either case, my family and I decided to grab some grub at the El Rodeo near the intersection of I-65 and State Road 334 west of Zionsville today. 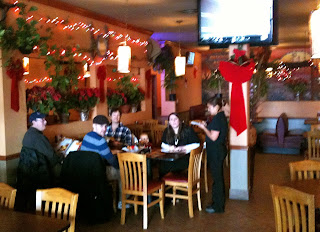 The first thing you’ll likely notice about this El Rodeo is that it seems fairly new – like it was built within the last couple of years or so. The outside is neat with good signage, and the inside is clean and well lit. There’s an outdoor seating area in front that looks like it would be fun in the summer. The interior is painted the traditional orange-red with southwestern-style murals encircling the dining room. Because it’s the Holiday Season right now, blooming poinsettias lined the walls, which looked very festive.

Like all restaurants of this sort, you get chips and salsa as soon as you sit down. Our chips came in white, red, and green, which I assume was for Christmas, but maybe they’re always that colorful. The salsa was good, pretty standard, but a little spicier than most. The queso dip was watery, but flavorfully hot. Because the server told me that the guacamole was made in-house, I decided to give it a try as well. It did seem fresh, but it was fairly tasteless nonetheless. It could have used some jalapeños or maybe a few more onions. It was certainly nowhere as good as the guacamole that I’m used to from El Sol de Tala out on east Washington Street. But maybe I’m spoiled!

Because it was lunchtime, I decided to try one of their lunch specials. I went with #7, which consisted of a burrito, an enchilada, and tamale. The tamale was a little cold in the middle, but was generously stuffed with shredded beef. There was a weird meat sauce covering the whole thing, though, which kind of masked the taste of the tamale itself. I’d have rather had it without the sauce. The enchilada and the burrito were good, both filled with spicy ground beef. I was happy with my choice, although I have to say that I think my dad made the best choice by ordering nachos al carbon. His nachos were loaded with shrimp, beef, chicken, and cheese, and they were absolutely delicious. 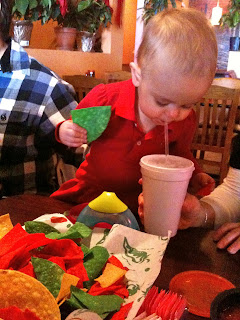 The service at El Rodeo was good. Our server was very nice and attentive, rushing to get us some extra napkins when the baby spilled some water. Actually, they accommodated the baby well over all, providing a stable high chair as well as a Styrofoam cup with a straw to make drinking easier for her. When we were getting ready to leave, they even picked her up and passed her around to say bye. For a minute, I thought we might have to leave her there!

Overall, El Rodeo provided us with some good, fresh Mexican food – just like at countless other Mexican places around Indianapolis (half of which are also called El Rodeo). There's really nothing on offer here that you can't get elsewhere, but if you're in the neighborhood and feel like eating Mexican, you could do worse. I wouldn't go out of my way to eat here, but certainly it wasn't bad.