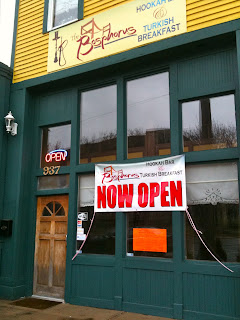 Bosphorus Turkish Café has been an integral part of the downtown Indianapolis dining landscape for the past several years, serving up delicious Turkish cuisine such as adana kebabs, gyros, and the city’s best hummus. Not content with lunch and dinner, the restaurant recently decided to expand its menu and its dining area (into the adjoining building) to create the new Bosphorus Turkish Breakfast. Does the spin-off live up to the original? Read on, gentle reader!

Entering the recently renovated building made me feel more like I was walking into someone’s nicely appointed house rather than a restaurant. That’s not a bad thing, mind you. The entryway is a bright, cheery room decorated with Turkish furniture, rugs, and lamps. In fact, the hostess/server told us that everything in the restaurant comes directly from Turkey. From the entryway, you head up a few steps to the dining room, which is furnished with several tables, a few booths, and a coffee bar. Of course Turkish music was playing, which helped to wake me up on a lazy Sunday morning.

After we were seated at a sunny booth along the windows, our server asked us if we wanted to try a cup of Turkish coffee (a strong, thick coffee prepared by boiling crushed-up coffee beans in water). I was not in the mood for something that heavy, though, so I ordered some American-style coffee instead, which was very good. A glance at the menu revealed that the restaurant serves several types of Turkish-style eggs for breakfast as well as a variety of omelets, French toast, pancakes, and crepes. We decided to order two different kinds of Turkish-style eggs, one kind that came scrambled with onions and potatoes and one kind that came sunny side up with broken yolks and soujuk (which is kind of like Turkish pepperoni). As an added kick, I asked if I could get some feta added to the scrambled eggs, which they were happy to do. 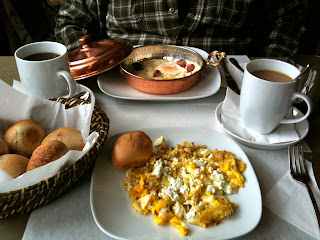 Once we ordered, it was just a few minutes’ wait before our food came up. Both kinds of eggs were well cooked and flavorful, although the scrambled ones were my favorite. They had basically been mixed with some good ole Hoosier fried potatoes, which were delicious and onion-y. The feta made them salty, as well, which I enjoyed. Next time I’ll probably leave the feta out, though, so I can better taste the potatoes. The sunny-side-up eggs were good as well, although the slices of soujuk were just kind of sitting on top of them instead of mixed in. Both dishes came with rolls, which were surprisingly good, warm and soft.

Overall, I enjoyed my experience at Bosphorus Turkish Breakfast. The food was tasty, the surroundings were comfortable, and the staff was friendly and eager to please. At times, I did feel a little like I was eating in a nice, European B&B instead of a restaurant, but I’m okay with that. I will definitely be heading back soon to try either the beef pastrami omelet or crepes filled with feta, both of which intrigue me.

On the weekends, Bosphorus Turkish Breakfast opens at 8:30 a.m. On weekdays, they don’t open until 3:00 p.m., although they serve breakfast all day in addition to other Turkish dishes (such as börek [a filled pastry], pogacha [a puff pastry], and guvec [shrimp casserole]), soups (such as tomato/pumpkin), and sandwiches (such as soujuk paninis, falafel wraps, and even hamburgers). The restaurant also offers free Wi-Fi.