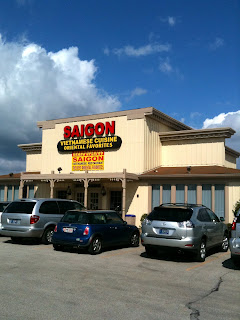 I first ate at Saigon Vietnamese restaurant a year or two back when it was located in a run-down little strip mall on Lafayette Road. I remember liking the food, but being a little turned off by the atmosphere. Having heard that the restaurant recently moved to a bigger, better building on West 38th Street, I decided to give it another shot last week for my birthday. As an added present, I got to expose my parents and my brother to Vietnamese cuisine—something none of them had ever tried. 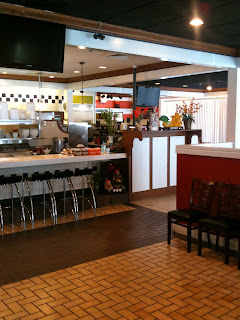 When we pulled into the lot, all four of us were immediately impressed by the new, freestanding building (which used to be a Bob Evans). The exterior is clean with plenty of parking. When we stepped inside, we were even happier; the interior is bright and airy and modern—pretty much the opposite of the interior of the old location. You can choose to sit at tables, booths, or at a bar in the front of the dining room. Of course we requested a booth. Who doesn’t love a booth?

The menu is extensive, 11 pages (not including the cover) with a 1-page lunch menu that features a selection of dishes for just $5.95. Always the bargain shopper, my mom opted for the Pad Thai Chicken lunch special. Lunches come with soup and an egg roll, too, making them even greater deals. Because she doesn’t like soup, she asked for two crispy (deep-fried) egg rolls instead, and the friendly server was happy to accommodate. She liked her Pad Thai, although it was a little too spicy for her. She said she prefers Sawasdee's Pad Thai. I can’t argue with that. 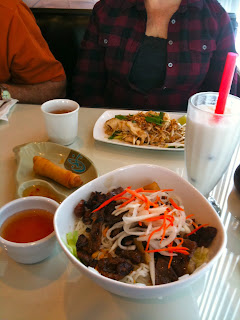 The men of the family were not very original; all three of us ordered #91, Bun Thit Nuong Cha Gio (grilled pork with crispy egg roll and vermicelli noodles). I recommended it, so I guess I’m to blame. Or to thank, as the case may be, because it was delicious. My dad and I devoured ours. My brother ate most of his. He said he liked it, but that he wouldn't be rushing back. Hey, it’s his first experience with Vietnamese food!

I was actually so pleased with the place that I went back later that week with a friend of mine to try the Thai Style Curry Beef lunch special. For my two lunch sides I chose a soft spring roll (often called a summer roll) and the crabmeat asparagus soup. The summer roll was great, fresh and light and served with a little peanut sauce. I liked the soup as well; it was basically egg drop soup with added seafood. The curry was pretty dang tasty as well. I am always a little leery about ordering Thai-style food at restaurants that don’t specialize in Thai cuisine, but I was happy with my lunch. The curry was flavorful with a nice heat to it that left my mouth burning (in a good way). My second visit featured the same great service as the first, so that wasn’t a fluke.

Note: They also serve bubble tea here, which is one of my favorite things. Unfortunately, all of their bubble teas here are icy/blended (instead of liquid). I had to try one, of course. It tasted fine (I had coconut), but the balls of tapioca were a little too big for the straw, which was frustrating. I ended up eating them with a spoon. I think I’ll hold out for some bubble tea at Taiwan Tea House.