How to Eat Fried (and Baked) Squirrels

I grew up in rural Indiana with a father and a brother who were (and still are) hunting freaks. On any given day, you could find my family eating whatever type of wild game was in season and/or available—deer, turkey, frog, quail, rabbit, dove, pheasant, and even the occasional turtle. And, yes, that list also included squirrel. Hey, this blog is called ALL Your Food Are Belong To Us! That’s not hyperbole, people.

Now, I haven’t eaten squirrel for several years, but my dad called me a few of weeks back to let me know that he had a couple of fresh little fellas all skinned, cleaned, and ready to cook. So, I hightailed it up to my parents’ house to see how the cooking was done—and then share the process with all of you.

First, you need to quarter your squirrels. (Dad says that one squirrel per person is a proper serving.) You should also soak the quartered squirrels in milk for at least 30 minutes. Soaking them overnight is even better. Supposedly, this reduces the gaminess of the meat by removing some of the blood. Here is what the cleaned and soaked squirrel pieces look like. 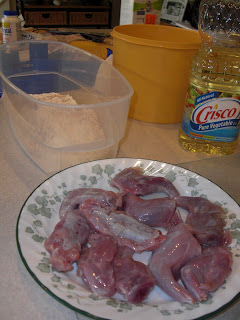 Next, coat the pieces in seasoned flour. We added some salt, pepper, and a dash of Cajun spices to our flour. Dad even has a nifty little flour-coating device, which you can see below. 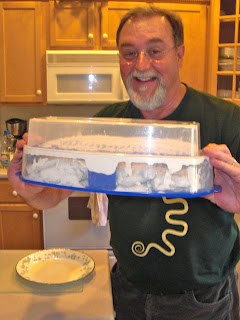 Now it’s time to brown the little suckers to seal in the flavor. Heat a half-inch of oil in a skillet on medium-high heat. Brown the squirrel in the hot oil, 5 minutes per side. 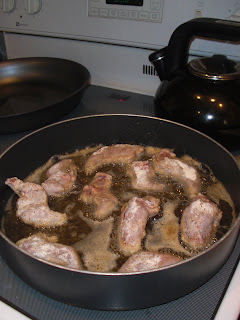 Remove the pieces and drain them on a paper towel. Place the squirrel pieces in an ovenproof dish and bake them at 325°F for 30 minutes. 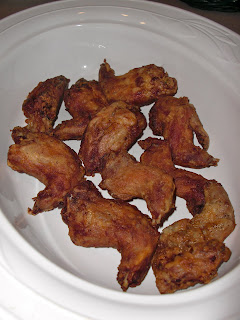 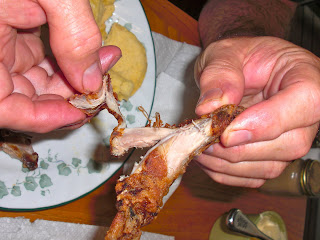 For those of you grossed out by the idea of eating squirrels, don’t knock it ’til you tried it. There is a recession on, you know; we may all be going into our backyards soon to scavenge for food—and squirrel would certainly be near the top of my list. I mean, squirrels are preferable to opossums, right? At least they don’t have such nasty tails….
Posted by Corey Michael Dalton on 9/25/2011