I need to give Cafe Zuppa another try. 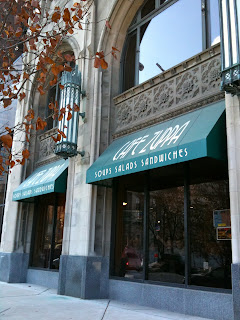 I’ve been meaning to try Cafe Zuppa for a while now. Over its one year of existence, I’ve heard nothing but good things about both its breakfast and lunch menus. So, flush with the holidays, I decided that yesterday would be the day to give the place a go.

I think I may have chosen a bad day. You see, yesterday was a Sunday, and on Sundays Cafe Zuppa doesn’t offer their full menus; instead, they set up a brunch buffet that contains many of their most popular items and costs $11.45/person. That’s certainly a reasonable price for a buffet that includes breakfast food, a few lunch dishes, coffee, juices, fresh fruit, scones, and even deserts. Therefore, despite my reservations about buffet dining, my friends and I decided to give the brunch set-up a try. Unfortunately, Cafe Zuppa’s buffet didn’t manage to overcome the problems that I have with buffets in general – that is, the food items tend to get old and cold before they reach my mouth.

Let me start with the positives. First, I really liked the scrambled eggs, even though they were room temperature. They were light and airy, just the way I like ’em. I even dressed mine up with a little salsa, some cheddar cheese, and a dollop of sour cream. Delicious. I bet the omelets served on weekdays here are quite good! The bacon was also pretty tasty, although it was not as crispy as I like it. Another casualty of the buffet-style arrangement, I guess. The new potatoes were okay, too, creamy and somewhat warm. 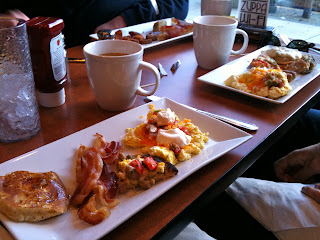 I wasn’t a fan of the pancakes, although, again, I blame that on the fact that they were pre-cooked and waiting on a warming tray more than I blame the cooks. They were small and thick and contained an apple slice at the center. I bet they’d be nice fresh, but they were kind of gummy and rubbery from being out too long. It seems like it wouldn’t be too hard to have a small grill set up to make the pancakes to-order, or maybe even a waffle iron to make waffles. But I’m no restaurateur, so maybe not. Surprisingly, given that the name of the restaurant features the Italian word for “soup” in it, I didn’t really care for the three soups on offer yesterday. The split pea and veggie soups were bland. The tomato and red pepper bisque was good, but it certainly didn’t have me doing back flips. Actually, nearly every dish was underseasoned, which I suppose makes sense for a buffet; you don’t want to put too much salt on things, given the dietary restrictions faced by many folks.

Overall, the meal reminded me of a breakfast buffet at a nice hotel. It wasn’t offensively bad or anything, but nothing really impressed me, either. Needless to say, I won't be going back for the brunch buffet, but I would still like to try Cafe Zuppa for a weekday breakfast or lunch sometime. As I said above, I have a feeling that most of the things I didn’t care for were symptoms of the buffet set-up and not of the restaurant or the food in general. I still hold out hope! Surely all the good things I’ve heard weren’t just exaggerations. (Yeah, yeah, don’t call you “Shirley.”)

To end on a positive note, the staff was very nice. Our busser was friendly and fast, as were the folks manning the buffet line. Oh, and I also liked the art they had on display. I’m not sure if the pieces are by a local artist or not, but they showed a good sense of humor. There was one painting of The Thing (from The Fantastic Four) wearing a monocle and another of a bunch of Fisher Price toys with a little Woody Allen toy hidden in their midst. C’mon. How can you beat that?