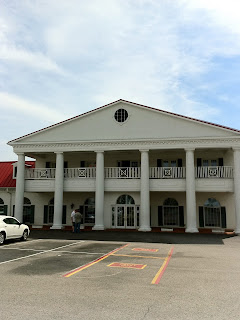 After Colonel Sanders sold his interest in Kentucky Fried Chicken in 1964, he decided to create another chicken restaurant. In a chivalrous move, the Colonel named the new restaurant after his wife – and so the Claudia Sanders Dinner House was born. Who knew? My friends from Louisville knew, that’s who! In fact, on my recent visit to that fair city, they suggested that we drive the half hour to the town of Shelbyville, Kentucky for a kitschy lunch at Claudia Sanders Dinner House. 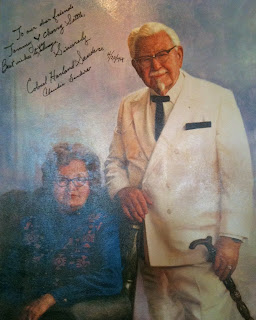 From the wooden wainscoting to the antebellum-style grand staircase to the period furniture to the brass chandeliers to the creepy painting of Claudia and the Colonel to the ultraconservative religious pamphlets in the foyer (thanks to the local megachurch), you’ll know as soon as you walk into this place that the average patron is decidedly over 65. 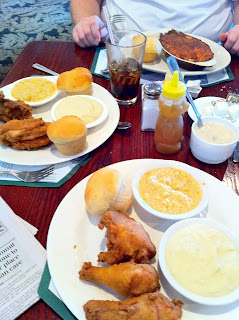 But we didn't drive all the way to Shelbyville for the ambiance; we came for the food. Which makes it disappointing to say that nothing I ate at the restaurant impressed me. The best part of the meal was the yeast rolls, which were so slathered in hot butter that they were effectively deep-fried. How can you go wrong with deep-fried bread? Other than that, everything was only so-so at best, perhaps rising to the standards of chain cafeterias like MCL. Because of the restaurant's connection to Colonel Sanders, I was especially disappointed in the fried chicken. I ordered the dark meat special, which consisted of two legs and a thigh with a couple of sides. The chicken was unremarkable and overcooked. I tried some white meat from my friend's chicken breast special and found that the white meat was even worse than the dark, dry and choke-inducing. I had to have a swig of sweet tea to wash it down. As for the sides, the chicken and dumplings were okay, but the mashed potatoes tasted suspiciously like instant. And there's a special level of Hell reserved for the "corn pudding," which was a bowl of what looked like pre-chewed/pre-digested chunks of corn in some sort of creamy sauce. It was not appetizing. On the plus side, it's probably easy to eat without teeth.

One of my two friends who did not order chicken opted for a chef salad while the other ordered Claudia Sanders' take on a Hot Brown (which consisted of layers of ham and turkey on toast smothered in cheese sauce then broiled and topped with tomatoes). There were no complaints about the chef salad, which was huge and filling. As for the Hot Brown, my friend said it was all right, but that it wasn't as good as many of the other Hot Browns he's had around the area (including at the Hot Brown's birthplace, the Brown Hotel in downtown Louisville).

On balance, I'm a little conflicted about Claudia Sanders Dinner House. I didn't care for the food and would never want to go back, but I'm not sorry we went. After all, going there provided us with a nice country drive from Louisville and a meal at a cheesy, fake plantation. If that's what you're looking for, this place might be worth a visit. Just don't expect great food or a very lively crowd.