Oceanaire: Still Floating (Although Not As High).

I don’t usually discuss national chain restaurants here on the blog, but I decided I’d make an exception for Oceanaire Seafood Room. I have been a fan of Indianapolis’ branch of Oceanaire since it opened downtown six or seven years ago. The fresh, delicious seafood and the classy dining room always have me coming back for more. Unfortunately, my most recent visit didn’t quite live up to my memories. I still enjoyed my dinner, don’t get me wrong, but I wasn’t as blown away as I have been in the past. 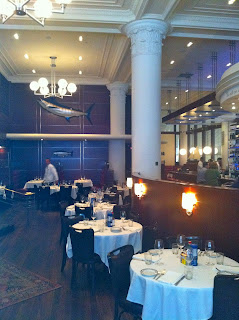 One thing about Oceanaire that never fails to impress me is the interior. The art-deco-style touches; mounted, colorful fish; red, leather booths; and white, linen table clothes always make me feel like I’ve stepped back in time and onto a luxury cruise ship in the 1930s. Sitting on the second-floor balcony overlooking the dining room/bar area is always a treat. Heck, even the white-tiled bathroom has panache.

At my last visit, my friend and I were seated on the main floor near the front windows. As soon as we sat down, our waiter brought us a loaf of fresh, warm bread with butter and a relish tray, which was nice. He also stunk of cigarette smoke and told us about his bad hangover, which wasn’t that nice. I also noticed that the pickled herring, my favorite part of the relish tray, was missing. We asked our waiter about it, and he explained that you now have to request the fish because they had been throwing away too much pickled herring. This was the first sign that the flagging economy has impacted even this relatively high-end restaurant, but there were others. (For one thing, the leather booths are starting to look rather tattered and worn. For another, the bathrooms used to feature real towels, iced-down urinals, and complimentary Old Spice and mouthwash, but none of those things was visible at my last visit.)

Even with these cost-cutting measures, the food was still tasty. As usual, I felt compelled to start my meal with a cup of the restaurant’s excellent clam chowder. The soup is just the right consistency (not too thick, not too thin) and packed with clammy goodness. Moving on to mains, I decided to order Maine diver scallops piccata with pine nut gremolata, and my friend went with mussels cooked with white wine, butter, and shallots and served with matchstick fries. We also decided to order a side of hash browns à la Oceanaire (which just means they’re cooked with Tabasco sauce, onions, and bacon) to share. 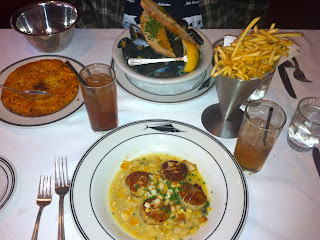 I was very pleased with my scallops – except for a handful of soggy croutons sprinkled on top. Even with the mushy croutons, the mix of capers and pine nuts was delicious, woody and salty, and worked really well with the perfectly cooked scallops. The mussels were nice, too, quite flavorful thanks to the shallots, butter, and wine. As a bonus, the mussels came with a couple pieces of toasted bread, which was a good way to soak up the broth. The fries were fine, but nothing to write home about; they were basically the same kind that you'd get at Steak ’N Shake. As for the hash browns, they were very greasy, which is to be expected, I suppose. They were also much hotter and spicier than I remembered, though, actually burning my mouth from the copious amounts of Tabasco. Because they were so greasy and spicy, they weren’t very enjoyable to eat. I probably wouldn’t get them again.

When it came time for dessert, we decided to be piggish; we both ordered a helping of the decadent Valrhona chocolate mousse. The mousse was delicious, as always, although I really could have done without the whipped cream on top getting in the way of my chocolate. Also, the mousse is VERY rich, too rich for me to finish, in fact. We probably should have split one order.

So, overall, I still like Indy’s Oceanaire. It may be showing its age a bit and it may have had to make a few concessions to the recession, but it still serves some good food. Yes, it can be a tad expensive, but, for my money, it’s still the best seafood place in town. Of course, we are in a land-locked state (I don't count Lake Michigan), so that's not saying a whole lot.