The Proof (on Main) is in the Pudding. 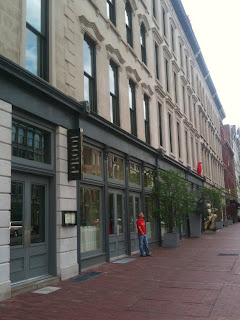 Proof on Main, the restaurant attached to Louisville’s popular (and awesome) hotel/art gallery 21c, is filled with funky and fun art such as a metallic green walrus, a projected video of a person eating from an oversized bowl and spoon, a painting of a woman walking on water, and a wall-mounted elk head made entirely from old shoes. Given the avant-garde artwork, I expected that the restaurant would serve innovative cuisine to match; so, at my recent visit, I was a little surprised by the rather traditional menu. Aside from the artwork, the dining room, too, was fairly typical of many high-end restaurants – white tablecloths, candles on the tables, subdued lighting, and so on. There’s absolutely nothing wrong with that, but I felt like the restaurant couldn’t quite decide if it wanted to be contemporary and cool or traditional and formal. This slight confusion was also reflected in the clientele, which seemed pretty evenly split between hip, young foodies and overdressed older folks. (When your server’s wearing blue jeans, a suit and tie seems unnecessary to me.)

But enough about the atmosphere. On to the food! As soon as you’re seated at Proof on Main, the server brings you a small hunk of a baguette. The bread was good and tasted fresh, but you only get one piece, so you better savor it. I ordered iced tea, which came out accompanied by a small carafe of simple syrup (in case I wanted my tea sweetened), which I thought was a nice touch.

To start, we decided to try the ham hock soup made with peas, bulgur, and a poached egg. Louisville is (sort of) the south so we figured they’d make a mean ham hock soup. Unfortunately, we were wrong. The ham in the soup was tender and flavorful and the egg was an interesting idea, but the broth was very bland and the peas were barely cooked. The broth was so thin and tasteless that it reminded me of dishwater. Breaking the egg yolk and mixing it into the broth (along with copious amounts of salt) kind of helped, but I still wasn’t a fan. After this disappointing first course, I wasn’t sure what else to expect. 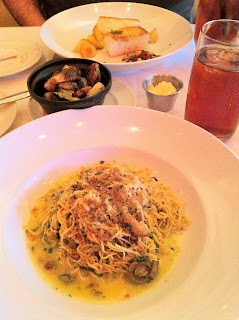 Thankfully, the food got much, much better after the soup course. I ordered tonnarelli pasta mixed with ramps, fiddleheads, lemon, and breadcrumbs. It was delicious. The fiddleheads added just the right kind of bitter to the light, lemony sauce, balancing the dish. Because tonnarelli noodles are square and because they were served al dente, they kind of reminded me of ramen. And I mean that in the best possible way! My friend went with the roasted halibut, which was served with Yukon gold confit, Marcona almonds, chorizo, and ramp leaves. His fish was really good, perfectly cooked and delicious, although the potatoes were a bit underdone. We also split a side of Brussels sprouts cooked with house-made pancetta and vermouth. These were also very good. We didn’t leave a single sprout in the bowl. For desert, we opted to share an espresso, dark chocolate, and orange pot du crème. This was nice, very rich and chocolate-y, although I didn’t taste the orange. I’m glad we shared it because I don’t think I could have handled the richness on my own. A bite or two made for the perfect finale, though.

The staff members at Proof on Main were, by and large, friendly and warm. Our server was fantastic, offering advice on where else we should visit in Louisville and even providing driving directions. Another server (who was not assigned to my table) did snap at me when I got up to use the restroom, but he just seemed kind of bitchy in general, so I won’t hold that against the place.

Overall, my experience at Proof on Main was a positive one. The food (aside from the soup) was good, the service was great, and the art made for some nice visual stimulation. Given the number of reportedly excellent, independent restaurants in Louisville that I have yet to try, though, I doubt I’ll be back to Proof on Main anytime soon. Still, I imagine I’ll make my way around to a second visit at some point down the road.