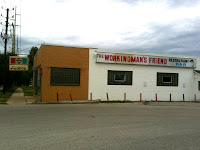 Workingman's Friend is not the kind of restaurant to go to if you want to impress your dining partner. It is a dive, make no mistake. That’s not to say I won’t be back, because I will. This particular dive has a couple of things going for it—namely a quirky sense of history and a delicious double cheeseburger. 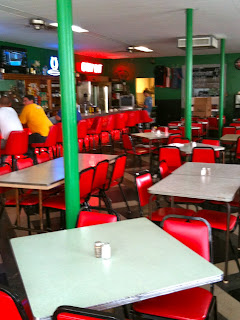 The first thing you’ll probably notice as you approach the restaurant is the tempting smell of grease. The aroma of frying burgers lured me in, forcing me to ignore the rather depressing, cinderblock exterior. Inside, the place didn’t look much better. It’s basically a rectangular box with wood paneling halfway up the walls and a bar along one side. The 1950s-style tables and chairs have seen better days, too; ours even featured dirty, wadded-up napkins under two of its four legs. Still there are some charms, if you look closely. There is a couple of old cigarette machines dotted around the place and a cool antique cash register, which they still use.

Even though it is a bar, they only have Bud and Bud Light on tap. That kind of disappointed me, but then I saw that they serve their beer in huge glass goblets, which made everything okay again. Soft drinks are in cans, too, not from a fountain.

We were not given a menu by our waitress, so I glanced around and noticed a small menu painted on a nearby window that consisted of just four items: giant double cheeseburgers, breaded tenderloins, Mexican-style chili, and onion rings. I ordered a cheeseburger and onion rings while my friend opted for the tenderloin and onion rings. Later I noticed the full menu above the bar, which includes items like Braunschweiger sandwiches, grilled cheese sandwiches, and smoked sausage. Although I was intrigued by some of the items (such as the Balkan salad), I probably would have stuck with what I ordered anyway. 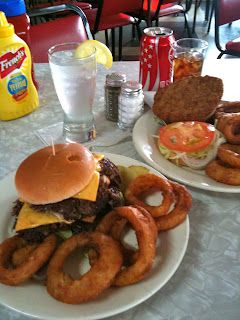 Our food came out quickly, which was nice. I was definitely the winner. The burger was awesome! The patties themselves were mashed thin and fried on a griddle until crispy (kind of like the burgers at Steak ‘N Shake, only better). Eating the sandwich, I felt like I was scraping the delicious, almost-burned bits of goody from the bottom of a pan and popping them into my mouth. The double cheeseburger came fully loaded, oozing with cheese and featuring an extra bun in between the two patties (like a Big Mac).

Compared to the burger, everything else was just okay. The onion rings were fine, but nothing special. I would have rather had fries. The tenderloin was a little disappointing, looking more like a Pete's Pride Pork Fritter than a real, hand-pounded/breaded Indiana tenderloin. Where’s the Hoosier pride?

A couple of warnings. First, the restaurant allows smoking, which can easily ruin any meal. Second, you must pay your bill with cash, so make sure you stop at an ATM before you arrive. That antique cash register doesn’t take plastic!