The L.S. Ayres Tea Room was an Indianapolis institution at the downtown department store from 1905 to 1990. The tea room closed up shop when Macy’s bought Ayres, but folks nostalgic for the restaurant can still visit a full-service recreation of the restaurant inside the Indiana State Museum. 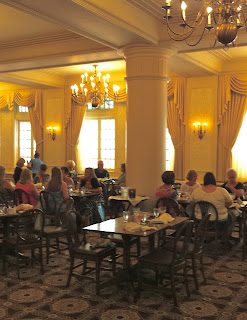 Stepping into the recreated tea room really is like traveling back in time; the dining room is decorated in an old-fashioned style with painted, wood-paneled walls, wainscoting, recessed ceilings, brass chandeliers, and (best of all) the restaurant’s original tables and chairs. They even have backlit, in-scale photos of Indy outside the windows to make you feel like you're eating in the downtown location. Despite the elegant surroundings, there doesn’t appear to be a dress code; I was wearing shorts and a t-shirt and no one raised an eyebrow. 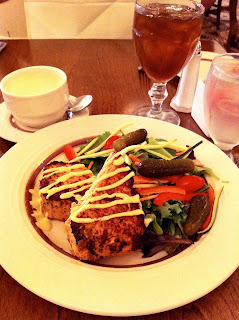 The baked ham salad was just what it sounded like—ham salad (like you'd eat on a sandwich) formed into loaves which were baked until they resembled Spam, served over greens, and drizzled with a mustard sauce. He was pleased with it, but thought it needed more mustard sauce. He requested some on the side, and said he liked it much better with that little extra kick. This dish was definitely old school; it looked like something that would feel right at home served with tomato aspic. We both agreed that the chicken velvet soup was very good, smooth and flavorful with chunks of chicken throughout. It was fairly rich, so I’m glad I went with just a cup, although he had no problem finishing off his bowl. The soup was especially good with a bit of buttered roll dipped into it. (As an aside, the folks at the other tables all received rolls with their appetizers, but we had to ask for some. Maybe it was the shorts and t-shirt?) My chicken salad sandwich was tasty, traditional with no surprises, which is fine. The fruit that came with it was fresh and delicious, too.

Our server (who was very good, by the way) told us about several mouth-watering desserts as well, but both of us were stuffed. Next time I’ll have to save room for the bread pudding, for sure.

The prices at the tea room are very reasonable. I wasn’t sure what to expect in that regard, actually, but we got both our meals plus two iced teas for less than $25.

Overall, I enjoyed my meal at the tea room. At first, I was a little disappointed that it wasn’t a traditional English-style “tea room”—someplace where you could get a pot of tea and finger sandwiches/pastries—but I got over that pretty quick. I do still have a hankering for some homemade scones served with clotted cream and strawberry jam, though. The restaurant serves High Tea on Sundays, so maybe I’ll have to give that a try some time.

The tea room is open every day for lunch except Monday (when the museum is closed).