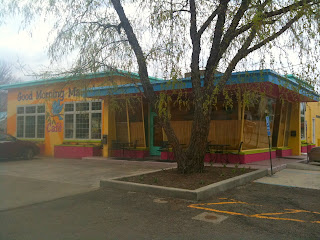 Housed in the most attractive converted gas station I’ve ever seen, Good Morning Mama’s Café serves up tasty breakfast food in a bright and cheery environment. The inside of the place is decked out in a 1950s theme that will appeal to you if you have some sense of nostalgia for the 50s. Personally, I don’t care for the 50s, so the Betty Boop cutouts, the murals of Hawaii, and the jukebox playing classic rock kind of turned me off. If the weather had been a bit warmer, I would have requested a seat on the outdoor patio/courtyard, which looks very nice and avoids the Elvis tunes. Still, the décor is certainly not a deal-breaker, just not my cup of tea.

As for the menu at Good Morning Mama’s Café, it’s actually quite substantial, offering both breakfast and lunch items. Because I was there in the morning, I stuck to the breakfast menu, which includes all of the standard dishes (pancakes, French toast, omelets, scrambles, biscuits and gravy, etc.), but also throws in a few curve balls from the 1950s as well, such as a fried Spam omelet, Hawaiian loco moco (rice, hamburger patty, fried egg, and brown gravy), eggs in purgatory (eggs simmered in Pomodoro sauce), and Elvis’ favorite sandwich (peanut butter, bacon, and banana). For their coffee, they serve locally produced Hubbard and Cravens brand, which is fantastic. 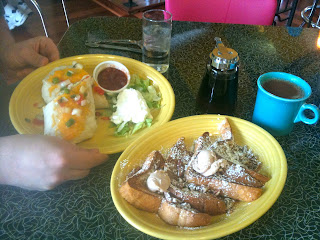 At my recent visit, my friend and I decided to try one savory breakfast dish and one sweet breakfast dish. As such, we ordered the stuffed burrito Sonoma (filled with eggs, bacon, chorizo, jalapeños, onions, tomatoes, cheese and topped with Rancheros sauce and sour cream) and the java French toast (made with coffee-flavored egg batter and topped with toasted pecans, powdered sugar, and cinnamon butter). The burrito was really good, offering a nice blend of ingredients. The sour cream on top helped to cool down the chorizo and jalapeños. As for the French toast, it was fine, although neither of us tasted any coffee flavor; it just tasted like your standard French toast with pecans and cinnamon butter on top. There’s nothing wrong with that, obviously, but it wasn’t quite what I was expecting. It was pretty sweet on its own, so I ate most of it without maple syrup. I tried the last piece with a little maple syrup on top, which pushed it into Sweetnessoverloadville for me.

All in all, I liked Good Morning Mama’s Café well enough. I’d go back, as long as there isn’t a line. The day I went, the place was pretty empty, which was nice, but I’ve heard it can get really busy on the weekend. I don’t think I’d be willing to wait for anything here – although I am kind of intrigued by those eggs in purgatory….