At Taiwan Tea House, It’s All About the Boba (Not Fett) 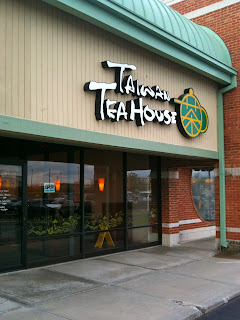 The owners of Taiwan Tea House shuttered their original restaurant around 8 months back with the promise of reopening at a new location soon. Now, after way too long for my taste, they have finally reopened at their new location at Clearwater Crossing (right next to the Barnes & Noble). Outside and inside, the new location looks pretty much like the original one. It also features the same menu and the same great bubble tea.

If you've never had bubble tea, allow me to describe it for you. Bubble tea is, basically, a sweet tea/milk beverage that contains large, cooked pearls of tapioca called “boba” floating in the liquid. Using a special, extra-wide straw, you suck up the tea along with the boba, chewing the tapioca balls as they pop out of the straw and into your mouth. There are a few places around Indianapolis that serve bubble tea, but Taiwan Tea House’s variety is my favorite. Not that the restaurant’s food isn't good, too. It is. But, for me, this joint is all about the bubble tea, baby.

My go-to meal at Taiwan Tea House has always been the meatball with rice, which I loved. At my recent visit to the new location, however, I noticed a conspicuous black line running through the name of that dish. Disappointed, I was at a loss as to what to order, so I consulted my server. She told me that the family tofu cooked with meat was her favorite dish, so I ordered that with mixed meat (chicken, pork, and shrimp). Noting that they no longer serve red milk tea (only green), I also ordered a green coconut milk tea with boba. My friend ordered an appetizer of popcorn chicken, the minced pork noodle (dry), and a green almond milk tea with boba.

All entrees come with soup, which consists of a simple broth containing some root vegetables. The soup wasn’t really my thing, a little sour and flavorless for me, but my friend enjoyed his. Much to my surprise, his popcorn chicken appetizer was quite good, peppery, tender, and juicy. I would have never thought to order popcorn chicken at a Taiwanese restaurant, but I’m glad he did – and, even better, that he was willing to share. My dish also came with two seafood cheese wantons, which were light and tasty and filled with a good amount of crabby cream cheese. 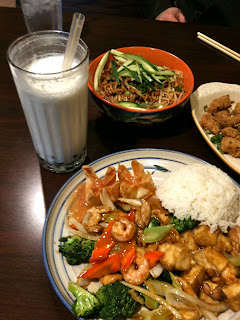 As for the entrees, I wasn’t crazy about his noodles; they were spicy, which I liked, but they also seemed a little soggy and overcooked to me. Frankly, I was glad I didn’t order a noodle dish – especially because I really liked my entree. The family tofu cooked with meat was light and slightly sweet with the tofu almost tasting like a mild fish. The veggies in it were not overcooked, either, still pleasantly crunchy. In fact, I think the broccoli was my favorite part of the dish! I’m not a huge broccoli guy, in general, so that’s saying something. The server did not steer me wrong.

Oh, and of course the bubble tea was delicious. In fact, thinking about it has got me wanting some right now. I wish there was a place that served it downtown….