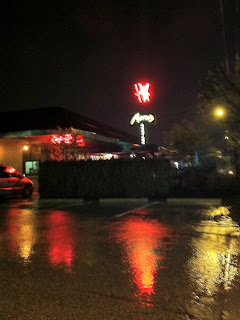 A couple of friends and I decided to stop in at Marco’s Restaurant and Lounge last week for one of my buddy’s birthdays. I had never been to the place, so I was keen to give it a try. It’s kind of an old-school Italian restaurant complete with dim lighting, candles on the tables, lots of wood paneling, leather booths, etc. It also has a full bar, which is always a plus. Given that we were seated near the bar, one of my friends decided to order a Peroni while I opted for a Fat Tire, both draft.

Because we were all starving (not literally), we ordered an appetizer of fried calamari to share. Our server also brought us a few mini loaves of sfilatino (Italian baguettes), which we devoured slathered in butter. The calamari was quite tasty, flavorful and not chewy with a tangy marinara dipping sauce. There was a white sauce, too, but I couldn’t pull myself away from the marinara.

As entrees, one of my friends chose the veal piccata with a Caesar salad and beef noodle soup, one went with the Parmesan-crusted pork medallions served over fettuccini with minestrone soup and a side salad, and I decided on the spaghetti San Marco (spaghetti with shrimp and clams in a spicy red sauce) with a side salad. My pasta dish didn’t come with a soup, but both of my friends said they were happy with theirs. The minestrone did look good! 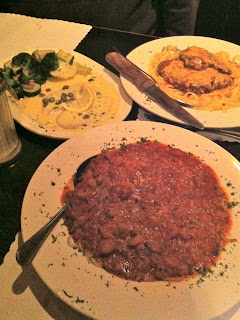 The wait for our entrees was kind of long, so we downed a couple of more beers to pass the time. I’m not complaining, mind you! When the food did finally arrive, it was universally enjoyed. My spaghetti San Marco was excellent, loaded with shrimp and clams. The sauce was spicy, as advertised, which I also liked. The veal piccata was okay, but the portion of meat was quite small and the sauce was thicker and creamier than any picatta sauce I’ve ever seen. Frankly, I prefer Iaria’s piccata sauce. The Parmesan-crusted pork medallions, however, were awesome. They actually reminded me of the “Perkinsville pork” dish served at Bonge’s Tavern, which is high praise indeed. All of us agreed that the pork medallions made for the best entree.

The only complaint I had was regarding our server. He disappeared for long periods of time, not checking on us or letting us know why our meals had been delayed. We also had to wait a really long time for him to bring our bill. Still, he wasn’t outright terrible, just a tad inattentive. The service wasn’t a deal-breaker.

When I mentioned to another of my friends that I had eaten at Marco’s, he told me that the restaurant has an excellent Tuesday night steak special that includes a filet, a salad, and one side – all for ten bucks. Sounds like a good deal that just may lure me back for a return visit!