Taking a Break at Recess 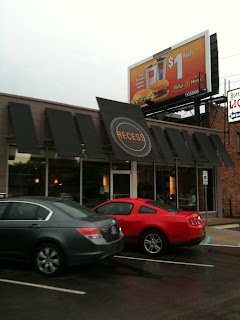 If you haven’t been to Recess yet, the set-up of the restaurant might need a little explaining. Basically, the place serves just one pre-set, multi-course, price-fixed meal each night. You may have a choice between two dishes for some courses, but, in general, everyone eats the same thing – whatever Chef Greg Hardesty has decided to cook up that evening. They post the dinner menu to their website each day so you can take a look, decide if what they’re serving is your cup of tea, and make reservations, if you’re interested.

Last night, for example, my three friends and I had a choice for our first course between a spring vegetable soup topped with pecorino cheese or a mixed greens salad with shaved fennel, grape tomatoes, and blue cheese. I went with the soup while my friends all chose the salad. Based on our reactions to the dishes, I chose… poorly. (Yes, that’s a reference to Indiana Jones and the Last Crusade. I couldn’t help myself!) They all enjoyed their salads, saying they were light and fresh and delightfully fennel-icious. My soup, on the other hand, was merely adequate. It was thin, filled with root vegetables, and kind of reminded me of Campbell’s. 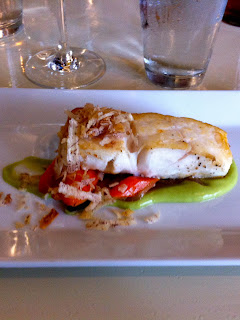 Slightly disappointed, I headed into course number two. Thankfully, there was just one option here – Alaskan halibut with cumin-roasted carrots and onions, avocado-lime puree, and fried taro root – so I couldn’t make a bad choice. Now this, this was delicious. As one of my friends commented in a faux British accent, “The flavor and texture of the halibut were spot on.” The taro root on top was salty and crunchy and the avocado purée was simply awesome. I could have eaten three more servings of this! 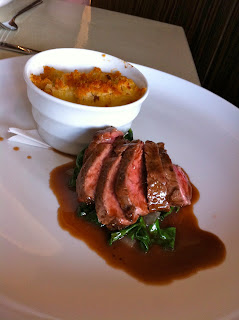 For our next course, we were again offered a choice of two dishes – panko-crusted black bass with mashed potatoes, wilted greens, and a roasted-garlic/tomato jus or lamb ribeye with cheddar macaroni and cheese, wilted greens, and red wine sauce. I stuck with the majority on this one and went with the fish dish. Only one of us chose the lamb. The sea bass was – like the halibut – perfectly cooked, crispy on the outside and flaky on the inside. Chef Greg certainly knows how to cook fish! I was a little dubious about serving fish atop wilted greens and mashed potatoes, but I was totally wrong. The greens were wilted, yes, but not mushy, and they tasted really good with the potatoes. The one of us who had the lamb ribeye love it, too; he said it was tender and juicy. It did look good, cooked to medium-rare, taken off the bone, and pre-sliced.

For dessert, we were presented with a “cuatro leches” cake, which was described as a traditional tres leches cake with the addition of buttermilk for some kick. The cake was pretty good, but it was more like a pound cake, heavier and denser than any tres leches cake I’ve ever had. Also, it wasn’t as milk-soaked as I was expecting, which kind of disappointed me. It was a lackluster ending to a good meal.

So, overall, I liked the food at Recess, but only two of the four courses really blew me away. For $56/person – not including drinks or a tip – that’s not really good enough to lure me back again anytime soon. Maybe on my next birthday – if the menu on that day appeals to me.