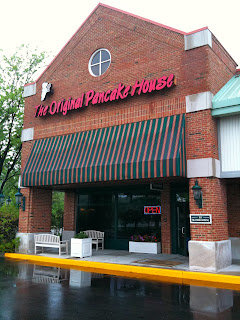 Although it is part of a Portland, Oregon-based chain of restaurants, there’s only one Original Pancake House in Indianapolis proper, so I’m going to review it. I’ll go back to featuring restaurants exclusive to Indy next week. As for the Original Pancake House, well, it certainly lives up to the “pancake” part of its name. The place serves lots and lots of varieties of pancakes including crêpes (both savory and sweet), buttermilk pancakes (some spiked with banana, bacon, chocolate chips, pumpkin, etc.), wheat germ pancakes, buckwheat pancakes, potato pancakes, and the pièce de résistance, the Dutch baby pancake (a sweet, egg-y, baked dish that’s like a cross between a soufflé and Yorkshire pudding). They also offer other breakfast classics like waffles, French toast, eggs, omelets, and so forth. But, really, why would you come to a “pancake house” to eat eggs? Don’t be crazy. Stick to the pancakes.

At my most recent visit to the restaurant, my family did, indeed, stick to the pancakes. My dad ordered the cherry crêpes with a side of bacon, my mom and sister both decided to try the pigs in blankets, my brother-in-law went with the apple pancake (one giant pancake covered with sautéed apples and cinnamon-sugar), and I ordered the Dutch baby pancake. 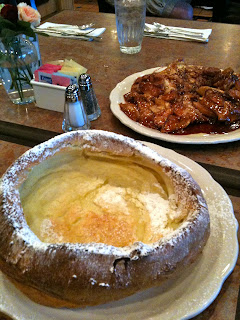 The results? My mother and sister both liked their meals. My sister said that the sausage in her “blankets” was great because it was a little spicy, which counteracted the sweetness of the buttermilk pancakes and the maple syrup. My dad cleaned his plate completely, commenting that he loved the tartness of the cherries and the lightness of the crêpes – especially with the side of salty bacon. I can back him up on how good the bacon was, thick-cut and cooked to perfection. My brother-in-law liked his apple pancake so much that he came remarkably close to finishing it. He said the pancake was egg-y and not like a buttermilk pancake at all, which he enjoyed. As for me, I drizzled my Dutch baby with a mixture of powdered sugar and lemon juice then added some lingonberries on top of that and ate as much of the delicious dish as I could. I got about three quarters of the way through it, which is a personal best. Hey, it’s a heavy, filling pastry! In fact, all of the dishes are huge, so you might want to split a meal, if you don’t have a big appetite like my dad does.

The restaurant also has good coffee and service. Our server knew how to keep a coffee mug filled, which is a great skill. The place offers free Wi-Fi Mondays through Fridays, but not on the weekends; I guess they don’t want to encourage folks to stay too long when they’re busy. There is also a nice patio for outdoor seating in less-wet weather.

Any complaints we had were minor. My sister thought that the kids’ menu was overpriced. To be fair, though, all of the food seemed a little expensive to me, so the kids’ prices are at least consistent with the rest of the menu. Also, the server brought my brother-in-law and me our dishes 10 minutes or so before he brought out the other meals. Although I was happy to dig in, it did make me feel a little guilty seeing my family members stare at me while I ate, impatient and hungry. Ah, whom am I kidding? I was fine eating in front of them! My brother-in-law did feel guilty, though.

One word of warning – the Original Pancake House can get crowded on weekends (as can most breakfast places, really). So, if you want to eat here on a Saturday or Sunday, come early or during church hours. Otherwise, you’ll probably be forced to wait in a line with a bunch of blue hairs for quite some time.