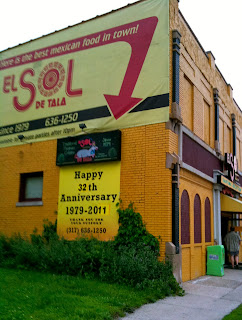 I’ve been a regular at El Sol de Tala for quite a few years now. I can’t claim to go all the way back to its opening in 1979, but I definitely remember my first taste of their tacos al pastor, how excited I was when they opened their (unfortunately ill-fated) second branch downtown, and how glad I was when they returned to their original spot on East Washington Street. Because I’m so familiar with the place, I’m going to review the restaurant like it’s an old friend or a family member, pointing out the things I love but also pointing out a few of its weaknesses. 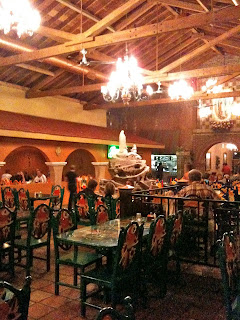 First off, the restaurant space itself is quite nice, consisting of a spacious central “courtyard” (including a large fountain centerpiece) plus additional seating on the sides and a small balcony area. You can also choose to eat in the cantina, if you prefer. Yes, there is a rather creepy stuffed donkey by the door, but just overlook that. The main dining room can get kind of loud when the place is busy, but it’s usually not too bad. If they start to seat you in the closed off area on the right side of the dining room, however, you might want to ask if you can sit elsewhere; that particular area is like one, long hallway that amplifies sound. I’ve overheard more than one awkwardly loud conversation in there—and I’m sure some folks have unwillingly eavesdropped on my business, too!

After you’re seated, you simply must order the guacamole, which is made fresh to order and can be modified to suit your taste. I get mine double spicy for a little extra kick while my friend Mary always orders hers without onion. If you’re not an avocado fan, I also like the cheese dip, but you should ask them to throw in some chorizo for added zing. I often order a margarita to go with my guacamole, too. Their margaritas are usually quite good—and strong!—although I have gotten one or two that were just... not right. Still, one or two iffy drinks out of a hundred ain’t bad. 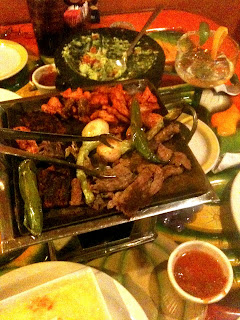 As for mains, one of my favorite dishes is the parrillada (mixed grill), which consists of steak, chicken, chorizo, scallions, and peppers served sizzling on a plate over an open flame. It comes with tortillas (by the way—always ask for corn tortillas, never flour), rice, black or pinto beans, and a side salad. If you’re thinking that that sounds like a lot of food, you’re right. I usually talk one of my friends into splitting this one.

I also dig their pollo en mole (grilled chicken breast simmered in a scrumptious mole sauce), their burrito, and the meal that made me fall in love with El Sol in the first place, tacos al pastor (pork al pastor served in corn tortillas with fresh cilantro, onions, and a roasted tomatillo-jalapeno salsa). On the other hand, they have terrible tamales here. Just terrible. They’re dry and crusty and tasteless. Stay away!

As noted, most of the meals at El Sol come with rice, beans, and side salads, all of which are delicious. The salads, especially, are surprisingly tasty. These are not the shredded piles of iceberg lettuce with a dollop of sour cream on top that you get at a lot of Mexican restaurants; instead, the side salads at El Sol consist of mixed greens and Chihuahua cheese lightly dressed with a delicious house vinaigrette.

Unfortunately, the desserts at El Sol are almost uniformly bad. I have tried their flan twice (because this seems like a place that should have good flan), but it was gritty and tasted semi-spoiled both times. Never again. One of my friends used to like the chocolate tamale with raspberry sauce and vanilla bean ice cream, but every time he’s ordered it in the past six months, they tell him that they don’t have any. I don’t know if they no longer carry the item but haven’t bothered to take it off the menu or what. Now I just skip dessert here and stop at Dairy Queen on my way home.

Service can be hit and miss as well. Some of the servers are quite excellent, but there are a few who will leave you high-and-dry—especially when the place gets busy.

Still, El Sol de Tala is definitely one of my favorite Mexican restaurants in Indy. The fact that I eat there are least once a month must tell you something. Stick with the guacamole, the margaritas, and one of the dishes I highlighted above and you’ll have a great meal.