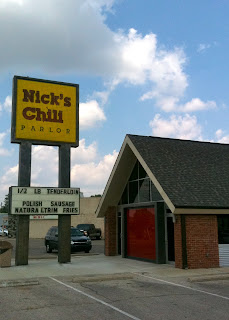 I’ve been meaning to try Nick’s Chili Parlor—an Indianapolis fixture located on Lafayette Road—for quite some time. Because the restaurant was recently renovated and expanded, I figured this was the perfect opportunity! From the outside, the place looks like an updated Wendy’s or Rax—a typical, functional fast food restaurant. The new interior is clean, bright, and airy; I don’t know what it looked like before, but now it has the feel of a vintage diner with lots of tile, 1950s-style, metal-edged tables, and red, vinyl booths. I liked it.

The dining room is set up like a cafeteria with desserts first. I never understand why cafeterias start with sweets, but, there you have it. Nick’s offers a variety of pies—apple, pecan, lemon meringue, and sweet potato—as well as some cookies and cakes.
After you work your way past the desserts, you get to the hot food. As the name suggests, the menu is heavy on chili (5-way, chili dogs, chiliburgers, etc.), but they also offer a 1/2-lb. breaded pork tenderloin sandwich, a chicken breast sandwich, a fish sandwich, and Polish sausage. Sides include “natural trim” fries, onion rings, salads, and coleslaw. 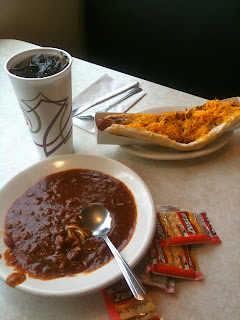 I had talked a friend of mine into going to Nick’s with me by telling him about the tenderloin (because he’s not a big chili fan). Unfortunately for us, the fryers were not working the day we went, so he couldn’t get the sandwich he wanted or even French fries. Disappointed, he ordered a bowl of chili with spaghetti and beans. I happily asked for a foot-long chili cheese dog with onions.

The chili was good, hearty and fairly traditional. This was not Cincinnati-style chili (like they serve at Skyline or Gold Star), so don’t expect that cinnamon-y kick. The chili was tasty, but it wasn't very spicy. Usually the lack of heat would bother me, but given that I ate here on a day when the mercury was pushing 100, I was fine with it. They also put lots of shredded cheddar cheese on my foot-long dog, which was fantastic. My friend was a little let down by the spice-level, so he asked for some red chili peppers to add to his soup. All they had were banana peppers, though, which cost 39 cents extra. He passed. Still, at under $6 apiece, we both agreed that the meal was pretty dang filling as well as economical.

The staff at Nick’s was pleasant, but not particularly friendly. I think they were a little out of sorts because of the fryer situation, though, so I’ll cut them some slack.

Nick’s Chili Parlor is open Monday through Saturday from 10:30 a.m. to 9:00 p.m. I plan to go back soon. I’d love to try the tenderloin—if I can pull myself away from the chili. And if the fryers are up and running!