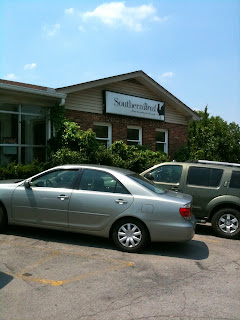 While visiting my sister, brother-in-law, and niece in Nashville recently, my family and I decided to go out for Saturday brunch. After consulting the Internet, we opted for Southern Bred, which had a number of good reviews online, a menu that sounded interesting, and a nicely designed website.

As we pulled up to the restaurant, I was a little surprised by how unassuming the place was; it’s housed in a nondescript building that looks like the offspring of a Denny’s and a suburban home. The inside wasn’t much more inspired, reminding me of the cafeteria at a fairly nice old folks’ home (except for the fun stenciled chickens on the walls). 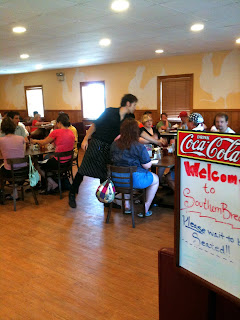 When we arrived, the place was only about half full, so we assumed that we wouldn’t have much of a wait. We were wrong. The hostess seemed to enjoy ignoring us, not even taking our party’s name for 5 minutes or so. She also seemed thrown by the fact that there were six of us (five adults and a baby), saying that they really only had tables and booths for four. We suggested that we could push together a couple of the smaller (empty) tables, but she said that was out of the question. After 20 minutes, a large crowd that included several parties with more than six people had joined us for the wait. (As an aside, there’s really no waiting area to speak of; patrons are just expected to loiter near the door, spilling out into the middle of the dining room itself.) At that point, the hostess caved in and started putting together tables to accommodate the guests.

Finally seated, we were hungry and ready to order. Thankfully, our friendly waitress brought us a basket with a variety of fresh baked breads—buttermilk biscuits, yeast rolls, and sweet cornbread muffins—all of which were pretty good. I also ordered a glass of sweet tea, which was served in a Mason jar and was, indeed, sweet. As an appetizer, we decided to share the fried green tomatoes. They came with a Louisiana ranch sauce; even with the sauce, the tomatoes were surprisingly bland. 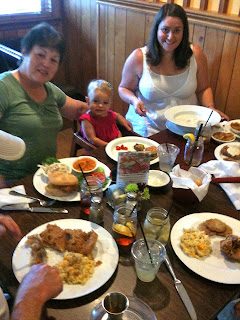 So far, none of us were impressed by Southern Bred, but we were still holding out hope for our entrees. And, although I can’t say that the dining experience was totally redeemed by the food, most of us were satisfied. My brother-in-law had the fried chicken with mac & cheese. He tends to be a picky eater, and he scarfed it all down. My dad’s fried pork chop was delicious with a light breading that didn't overpower the flavor of the juicy meat. He was also impressed with his side salad, which was huge and included almonds, bacon, homemade croutons, and a house French dressing. By far the best thing that any of us ordered was the chicken & dumplings. My sister ordered that dish and she was reluctant to share. After trying it, I could see why; the dumplings really were excellent, nice and doughy. I had the country-fried steak with mashed potatoes. They were fine, but nothing special.

Unfortunately, my mom didn’t have even a “fine” meal. She ordered the cod sandwich with coleslaw and honey mashed sweet potatoes. The fish arrived raw in the middle, so she didn’t eat much of it. She also didn’t care for the coleslaw. So, she contented herself with the sweet potatoes and having a few bites of the rest of our meals.

As for the kids’ menu, my sister and brother-in-law were quite pleased with it; for just $4, the little ones can get two sliders, a side dish, and a drink. My niece had the fried okra as her side, which was a little mushy but surprisingly spicy. I liked it.

Bottom line: long wait (for no good reason) + disorganized staff + unmemorable food + mediocre ambiance = no return visit. I’m sure Nashville has better breakfast places than this—and I look forward to uncovering one of them on my next visit.