When Thai Spice first opened in a shopping plaza across from the Greenwood Park Mall several years back, its delicious food gave me a reason to drive to the south side of Indianapolis on an almost-weekly basis. After some pretty good Thai places opened closer to me, though, I found myself making the drive less and less often. In fact, when I made a visit to the restaurant a week or so back, I was surprised to find that it had moved locations (just a block or two west) to a new, freestanding building. Well, I say “new,” but the waitress told me that they’d been there for nearly a year! I guess it had been a while…

First off, I was very impressed with the new digs. The rich burgundy and mustard-colored walls and the thick, cloth napkins (sporting the restaurant's logo) add a sense of elegance while the whimsical lotus lights keep things laid back. I was seated near the full bar, which was fine by me; made it easier to order a couple of mixed drinks.

As a starter, my friend and I decided to order the shrimp summer roll with peanut sauce. The appetizer was tasty, although the shrimp was just piled on top of the sliced roll instead of packed inside of it, which meant my shrimp kept falling off. Not the best summer roll I’ve ever had.

For our mains, my friend ordered mee ga tee (coconut-flavored rice noodles topped with peanut sauce, onions, bean sprouts, and ground peanuts) with chicken and I ordered panang curry (a mildly spicy curry mixed with green beans and kaffir limes leaves) with beef. I was really excited for the panang curry because That Spice serves Indy’s best version of the dish. So, I was disappointed when one of the owners came out and told me that they were out of green beans. He offered to replace the beans with asparagus, but that didn’t sound very appetizing to me, so I switched my order to yellow curry (green and red peppers, onions, potatoes, and cucumber in a creamy curry sauce) with chicken instead. 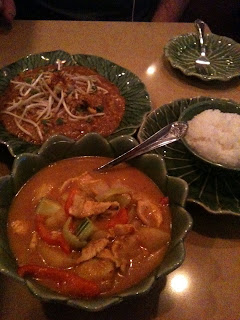 As we waited for out meals, our server brought us some fried tofu with chili sauce, peanuts, and cilantro. I had forgotten that entrees come with tofu, but I was happy to get it. The tofu was well done, crispy on the outside and soft on the inside, and the sauce was nice, too. When our dinners arrived, we both dug in—and didn’t stop until the food was all gone. My curry was excellent! My friend’s noodle dish was a little too much for me—incredibly rich and coconut-y—but he loved it.

Our server was very good as well, friendly and quick. She even put up with a lame joke or two from me with a smile on her face. After finishing my meal, I sat back in my chair, full, and was quite pleased with the entire experience. I definitely plan to get back to Thai Spice’s new spot soon—hopefully before another year goes by!