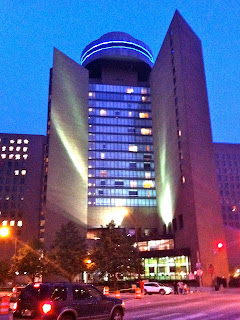 Perched high atop the Hyatt Regency in downtown Indianapolis, the Eagle’s Nest is one of those revolving restaurants that every city seems to have—and where locals rarely eat. It offers a 360-degree view of the city paired with a menu that changes with the seasons. On my recent visit, my friend and I decided to eat late (9:15) so we could give the food a try while also discovering what Indy looks like from above at night. Turns out—it looks pretty nice! And the food was surprisingly good, too.

As soon as you’re seated at the Eagle’s Nest, they bring you a basket of ciabatta bread with butter. The bread is no great shakes—straight out of a bag and not even warmed. I was a little worried about how the food was going to be, given how underwhelming the bread was. Luckily, our appetizer of crab cakes (pan-seared with Peppadew pepper aioli) assuaged my fears. The crab cakes were excellent, comprised almost entirely of crabmeat.

As a starter, I had lobster bisque and my friend had a romaine salad. My bisque was really good, thick and flavorful with a nice, spicy bite. Unfortunately, it was only lukewarm, which was kind of a bummer. My friend’s salad featured candied bacon, mixed tomatoes, and blue cheese with buttermilk dressing. It was just okay; it was a salad. 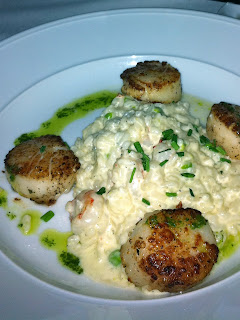 For my entree, I had the seared scallops over shrimp and green pea risotto. The scallops were delicious, perfectly cooked (although I did get a little bit of grit). The risotto was really nice, too, loaded with shrimp. I ate every bite. My friend opted for the chicken cordon bleu, which was crispy on the outside, but tender on the inside. He liked it—especially the Dijon sauce that came with it.

Overall, the food was actually quite a bit better than I was expecting. When you eat at a hotel restaurant (especially one with a gimmick), you can never be sure what you’re going to get. I was not disappointed with the meal—although it was a bit pricy, make no mistake. Still, the ambiance was good and you do get an overhead tour of the city, which is cool.

As for the service, our waitress was excellent, friendly and helpful, giving us food suggestions. We even chatted with her a long time about the downfall of Broadripple and the punk band she was in, Action Barbie. I may go back again just so I can talk to her some more!

Be advised that the restaurant does take its dress code seriously. You’re required to be “business casual,” which basically means no tank tops, logo tees, athletic wear, shorts, and so on.