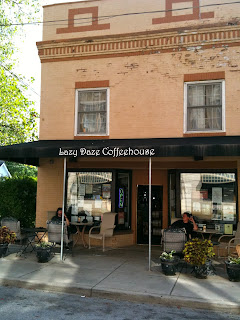 Located in the heart of Irvington right off East Washington St., Lazy Daze Coffeehouse certainly lives up to the laid back vibe that its name implies. Outfitted with natty but comfortable furniture that looks swiped from an eccentric great aunt's house, the vibe is student-y and hippy-ish. Those may not be real words, but, hey, that’s the kind of unconventional language inspired by this joint. If you don’t want to sit inside and listen to Wilco on WTTS, there is also an outdoor deck.

The menu at Lazy Daze is fairly typical of most coffeehouses including coffee, espresso-based drinks (cappuccinos, lattes, mochas, etc.), hot chocolate, and a wide variety of loose-leaf teas (and even tea smoothies). They also serve ice cream and milkshakes, however, which sets them apart a bit. 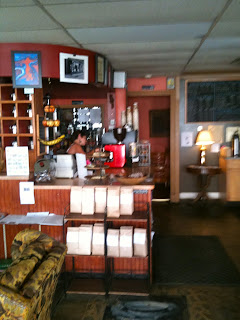 At my most recent visit, I decided to order an iced mocha. Hey, it was hot! The drink was a tad too sweet for my taste; next time I'll order it with half the syrup—and maybe an extra shot of espresso for good measure.

One of my friends who lives in Irvington said she loves the “frapps” at Lazy Daze, especially her favorite, the Milky Way Frapp.

Look, this isn’t my favorite coffeehouse by a long shot, but it’s still a nice place to hang out. It is the center of the Irvington community, hosting weekly open mic nights, featuring local art, and serving as a meeting place for local ghost tours. Best of all, the hours are really good—better than most independent coffee places; they stay open until 10:00 p.m. Monday through Saturday and they’re even open Sundays until 9:00 p.m. For all those reasons, I’m sure I’ll find myself visiting Lazy Daze again in the near future.