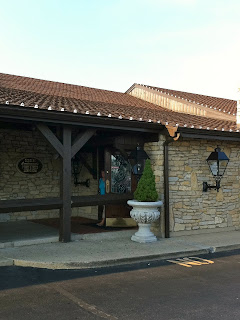 It seems like there’s always a long line at Gray Brothers Cafeteria, but if you’re craving down-home country-style food, this is definitely the place to eat. And, thankfully, the line moves at a pretty steady pace; it only took my friend and I about 20 minutes to get from the door to the cashier. Not too bad. As I waited, I couldn’t help but notice that many of the people in line with me were over 65. And that most of them were, well, on the larger side of things. Just observations!

Gray Brothers Cafeteria is set up like every other cafeteria in America; you grab a tray, walk along the front of a steam table, and tell the people on the other side of the sneeze guard what you’d like. They start you off with desserts, offering many different kinds of pie (banana, cherry, peanut butter, butterscotch, coconut, chocolate, and so on) and cake (German chocolate, hummingbird, strawberry, carrot, cheesecake, and more). They are probably most famous for their strawberry pie, although I can’t figure out why; it’s just some sliced strawberries in a pie shell with neon red glaze squeezed over the top. Not really gourmet. 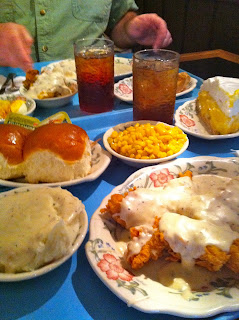 At my most recent visit, I opted for the white meat chicken tenders, mashed potatoes with white gravy, corn, yeast rolls, sweet tea, and banana cream pie for dessert. The chicken tenders really lived up their name, moist and delicious on the inside but still crisp on the outside. Of course, the thick, white gravy made them even better! The corn was fine; I'm sure it was out of a can, but it was buttery and peppery—just like grandma used to warm up. The mashed potatoes tasted like homemade, but I suspect that they were a combination of real mashed potatoes bulked up with instant. The banana cream pie was fine, but the bananas were all on the bottom and then covered with banana-flavored pudding. It would have been better if the pudding and the bananas had been combined.

My friend had the chicken fried steak with white gravy, dressing, deviled eggs, unsweetened iced tea, and sugar cream pie. The deviled eggs were good, mustard-y and vinegar-y, but the steak was just okay. It had been soaking in the white gravy for some time, so it’s breading was soggy. The sugar cream pie, on the other hand, was delicious.

The service at Gray Brothers was all around nice and friendly; they even have people in the dining room who bring drink refills. The decor is homey, old-fashioned, and clean. They restaurant also has a separate carryout door/line if you want your food to go, which is nice.

So, yes, I enjoyed my meal at Gray Brothers. Really my only problem with cafeterias like this is that they tend to make me over eat because the portions are way too large. For example, they give you two whole yeast rolls for an order, which is one too many. Plus the food isn’t exactly healthy to begin with. Hmmm. Come to think of it, maybe those two points explain all the large people in line!