I'm going to do something a little different on the blog today. Instead of giving my thoughts on a restaurant, I'm going to present a very special holiday recipe. Every year around Christmastime, my Aunt Mary Ann makes a four-layer whiskey cake that my dad simply loves. It's a winter tradition that dates back to when he was just a kid. Unfortunately, my Aunt Mary Ann passed away last month. For most of her life, Aunt Mary Ann held the secret recipe for her whiskey cake close to her chest, never revealing how to make it. A couple of years back, though, she decided to open up and share the recipe with the family. While she was alive, none of us had attempted to make it, preferring to let her tackle her famous dessert. This year, though, my mom and I decided to put the recipe into practice to scratch my dad's yearly whiskey cake itch. Here's a picture of my brother, my dad, and me with the final result: 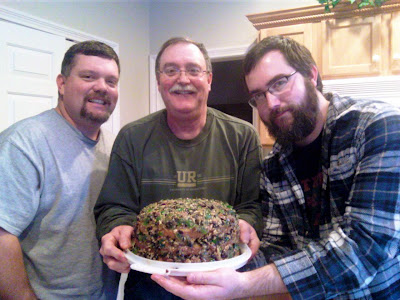 The cake turned out really well! Aunt Mary Ann always used one package of red candied cherries and one package of green to make the cake appear even more festive, but we could only find the green variety. Nevertheless, dad said that it tasted nearly as good as Aunt Mary Ann's own cakes. (Hey, it was only our first try!)

So, as a tribute to Aunt Mary Ann, here is the recipe that was secret for so long. I think she'd like the idea that people all over the world can now try her famous dessert.

1. First you need to make the four, thin cakes so they can cool while you whip up the icing. So, start out by creaming the cup of butter with an electric mixer and then gradually mixing in the 2 cups of sugar. Beat the butter and sugar until the mixture is light and fluffy, and then mix in the 1 teaspoon of vanilla.

2. This is where it gets tough. There are a lot of dry ingredients to mix in! Using the electric mixer, slowly add the 3 1/4 cups sifted flour, the 3 1/2 teaspoons baking powder, and the 3/4 teaspoon salt. To keep the batter at a manageable consistency, alternate adding the dry ingredients with splashes of the 1 cup of milk. After you’ve got all the dry ingredients and all the milk mixed in, continue beating the batter until it’s smooth.

3. In another bowl, beat the 8 egg whites with an electric mixer on high speed until they’re stiff but not totally dry. This took me a while…. Also, make sure you save the 8 egg yolks because you’re going to need those for the icing!

4. After you’ve beaten your egg whites into the proper consistency, fold them into the cake batter with a spatula. The batter will be thick.

5. Spoon the batter evenly into four round, 9-inch, pre-greased baking pans and bake at 350 degrees for 15 minutes. Remove from the oven and let them stand in their pans for 5 minutes before turning the cakes out on a wire cooling rack.

6. While the cakes are cooling, you can make the icing! Beat the 8 egg yolks (I told you to save them, remember?) with a fork and put them in a saucepan with the 1 1/4 cups sugar and the 1/2 cup of butter. Cook over medium heat, stirring constantly for about 5 minutes or until the sugar is all dissolved and the mixture has thickened slightly.

7. Remove the mixture from the heat and stir in the remaining ingredients (2 cups chopped pecans, 2 cups currants, 1 3/4 cup shredded coconut, 2 cups candied cherries, 1/4 teaspoon salt, and – of course – the whiskey). After you’ve stirred everything in, let the icing stand until it’s cold.

8. After it has cooled, spread the icing between the four cake layers as well as the on the top and sides of the cake.

9. Store the cake in an airtight container for 3 or 4 days before serving it to allow the cake to ripen. Be forewarned: some of your friends and family will love this cake and demand that it be made every year while others will tell you it is disgusting. It’s kind of a polarizing dessert.
Posted by Corey Michael Dalton on 1/05/2011