Zest! has never once made me think of soap. 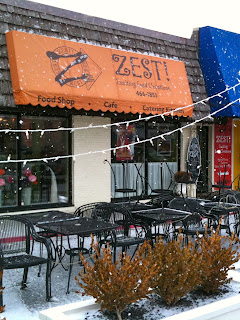 I’ve eaten breakfast at Zest! Exciting Food Creations a couple of times in the past, but haven’t taken the time to write a review. After my most recent visit, I decided I’d take the time.

The first thing you’ll probably notice when you walk into Zest! is how cheery and open the space is. The walls are painted in bright, vibrant hues and the tables are decorated with fresh flowers. These colorful touches go some way towards earning the exclamation point in the restaurant’s name. As an added bonus, each table is covered with a paper tablecloth that kids (or the kid-at-heart, in my case) can decorate using the provided crayons. Fun!

The dining area is actually made up of several rooms, some of which are cozier than others. My friend and I were seated in the very front room last week, which seems more like a patio than someplace I’d like to eat. Because of our proximity to the front door, I felt like we were seated in the entryway – an entryway that was quite chilly on a snowy winter’s day. The metal garden furniture that they were using as dining room tables and chairs certainly didn’t help to warm me up. The chill in the air made our food and coffee cool off quickly, but our excellent server was always near to give us a warm-up on the coffee. There wasn’t much he could do about the lukewarm food, though. 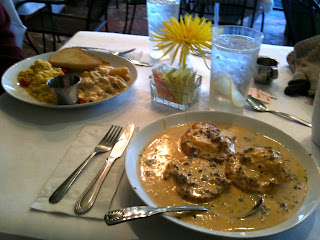 But enough about the cold and the furniture! How was the food? Overall, pretty dang good (with one exception). I ordered the double sausage-sausage gravy, and, for my money, it lived up to the hype. The gravy was thin-ish, not clumpy, and contained lots and lots of delicious sausage. I think the gravy might have had cheese melted into it or something, too, because it was an odd orange-y color. Some people might think it’s too runny, but I actually prefer thin gravy over the thick, clumpy stuff that many restaurant serve. The gravy was generously ladled over top of three biscuits, which were crisp on the outside and fluffy on the inside. Because of their golden-brown coloring and the crunchiness of their outer layer, the biscuits almost seemed like they’d been deep-fried. That’s a good thing. My friend ordered the “Uptown” omelet, which was filled with herbs, tomatoes, and white cheddar. He enjoyed the omelet. I gave it a try and thought it was good, too, although it wasn’t my favorite omelet in Indy. As for the bad, my friend’s omelet came with a side dish called “cowboy potatoes.” Basically, it consisted of some cooked potatoes with a cheesy, milky kind of sauce over them, kind of like au gratin potatoes. Now, I’m not a fan of au gratin potatoes, so I was predisposed to not like the dish from the start. My friend, on the other hand, likes au gratin potatoes, but even he had trouble eating the cowboy potatoes. Why? Because mixed in with the chopped potatoes were a bunch of soggy, undercooked French fries straight from the freezer and still cold in the middle. My friend ate what he could of the dish, but left a pile of French fries on one corner of his plate.

Aside from the cowboy potatoes (which weren’t mine, anyway), I was happy with the meal. Zest! serves breakfast and lunch (including omelets, burgers, fish tacos, quiches, salads, etc.) all day until 5:00, at which point they become a somewhat fancier dinner restaurant. I am curious to try their dinner menu some time, so I may have to do another review of the restaurant in a few months’ time.