I’m visiting my sister, brother-in-law, and niece in Nashville, Tennessee this week. Because they’ve only lived in the city for around seven months, we decided to give one of the local touristy restaurants a try today. The Pancake Pantry, which calls itself “A Nashville Tradition,” seemed to fit the bill. 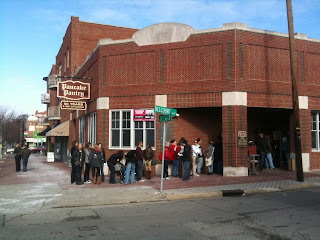 Located in Hillsboro Village, a pedestrian-friendly strip of stores and restaurants just a few miles southwest of downtown, parking for the restaurant was kind of a mess. Thankfully, after searching for a while, we managed to snag a spot in a nearby pay lot that gives you the first hour and a half for free. After we walked around to the front of the restaurant, we saw a line stretching out the front door and around the corner. Because the Pancake Pantry is a popular breakfast spot, waiting in a long, outdoor line is, apparently, part of the experience. Thankfully we arrived rather late in the day (around 1:00) and only had to wait 10 or 15 minutes to get out of the cold winter air. In reality, the line looks worse than it really is; everyone just stands outside because there's absolutely no waiting area inside. To keep you warm while you wait, the restaurant even offers self-serve coffee for people in line, which is a nice touch. 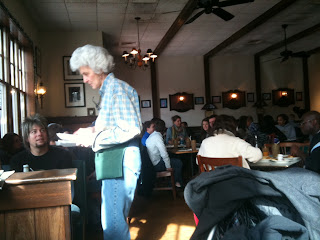 The interior of the restaurant has light walls and dark beams, which reminded me of a German hunting lodge (without all the antlers, of course). The clientele appeared to be made up mainly of college kids, probably because of the restaurant’s proximity to Vanderbilt University and Belmont University. In contrast to the young customers, the servers were mainly white-haired grandma types. Our server, for example, was a sweet lady who was quick with the coffee refills and happy to help us choose our meals. She told us that the sweet potato pancakes were her favorites and that she didn’t care for the potato pancakes (which, she told us, are not like latkes but are, instead, made from potato flour).

After taking some time to peruse the long list of specialty pancakes, I decided to go with the apricot-lemon delight pancakes. My brother-in-law ordered the Georgia peach pancakes while my sister went with the pigs in blankets. The restaurant has an extensive kid’s menu, so we ordered “bears in the snow” (bear-shaped pancakes served over chocolate chips and dusted in powdered sugar) for my niece. While we waited for our food, I continued chugging coffee while my sister sipped a cup of cocoa, which she gave high marks. The wait did seem a little long (around twenty minutes), but it was certainly acceptable. We were just surprised it took that long to make pancakes, although the place was pretty busy. 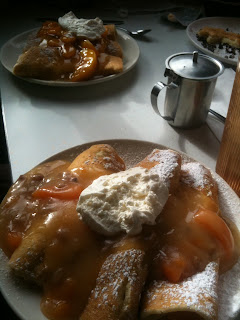 As for the food, it was good! My sister’s pigs and blankets were tasty, if fairly standard. Let’s be honest, though – there’s only so much you can do to that dish. Still, she enjoyed them and ate them all up. They came with warm maple syrup served in a Heinz 57 bottle with an olive oil-type spout, which was kind of interesting. My brother-in-law and I both had over-the-top, sweet pancakes topped with whipped cream and served cold. After eating half of my apricot-lemon delight pancakes I had to call it quits, wishing for bacon or something savory to counteract the overwhelming sweetness. They were really good, don’t get me wrong, but just too much for me. My brother-in-law, who has a bigger sweet tooth than I do, ate all of his Georgia peach pancakes. We both agreed that we liked how the sweet pancakes were served cold; it was kind of refreshing. As for my niece’s food, the bear-shaped pancakes were cute and tasted good, but I’m not sure our choice of chocolate chips for a baby was a wise one. She ended up with melted chocolate all over her hands and face.

Overall, the Pancake Pantry was good and I'm glad we went, but I'm also glad we didn't have to wait in line for too awfully long. If the wait had been much longer, I’m not sure I would have felt it had been worth it. At the end of the day, the restaurant is serving pancakes. Good pancakes, sure, but nothing that incredible.