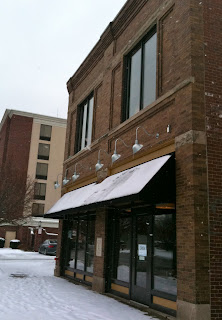 The Tavern on South is the latest Indianapolis restaurant staking its existence on hungry Colts fans. Luckily for the tavern, it has one of the best football-related locations in the city, just one block west of Lucas Oil Stadium. According to our server, the proximity has been working; the place has been packed on home game days. But location isn’t all that the Tavern on South has going for it. The food I tried at a recent visit was better than what you can get at most of the downtown bars, and the restaurant boasts a second-floor deck that should make for beautiful outside dining in warm weather. In addition, the tavern is close to both the newly expanded Indiana Convention Center and the Indianapolis Cultural Trail, which should help bring in diners year round. 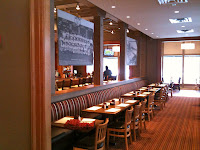 Being a tavern, one side of the restaurant is dominated by bar, which serves a wide selection of draft beers including choices from Indianapolis’s own Sun King Brewery. Luckily, I visited the restaurant on a Wednesday when draft beer pints are just $3.75, so, I decided to try two different beers, Beaks's Best Bitter (brewed by the New Albanian Brewing Company in New Albany, IN) and Milk Stout (brewed by the Left Hand Brewing Company in Longmont, CO). They were both excellent, but the Beak’s Best Bitter was my favorite, hoppy and refreshing. The non-bar side of the restaurant features a mix of booths and tables and is decorated with vintage pictures of local sports teams and events, including the Indianapolis Indians baseball team and the Indy 500. Most interesting to me, however, was the photo of Indianapolis’s entry into the Negro American League, the Indianapolis Clowns, which, at one time, counted both Hank Aaron and Toni Stone (the first female professional baseball player) among its ranks. 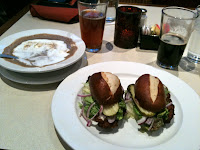 Primed by the good beer, I was ready for some good food, and, by and large, that’s what I got. Although I was in the mood for a sandwich, the $5 pizzas (specially priced from 4:00 to 7:00 weekdays) nearly tempted me away. Ultimately, I decided to stick to my guns and order the Tavern Tenderloin Sliders (two panko-crusted pork tenderloins served with mustard aioli, lettuce, pickle, and red onion on pretzel rolls) and a cup of Mushroom Cappuccino Soup. My soup arrived promptly and was quite good, mushroom-y and smooth with a dollop of cream at its center. The tenderloin sandwiches were the real stars of the show, though. The pork was lightly breaded and fried so it was crispy on the outside but tender and juicy on the inside. They actually reminded me of the freshly pounded tenderloins that my mom cooks instead of the overly breaded, deep-fried ones served by many restaurants. The pretzel rolls were a nice touch, too, really adding flavor to every bite. Sandwiches at the Tavern on South are served with a side of kettle chips, unless you opt to pay extra for something else. Usually I’m not a fan of serving potato chips as a side because, well, I don’t really care for chips and it just seems kind of cheap. Fortunately, the chips here are the exception, house-made and dusted with a mix of spices. I ate all of my chips, which might be a first. Dessert was the one disappointment of the meal. I decided to try the “cookies and cream,” which turned out to be two hard chocolate chip cookies stuck together with cinnamon ice cream and paired with a glass containing a coconut milk shake. The only part of that dish that I liked was the ice cream. Overall, though, I was happy with what I ate and drank at the Tavern on South. Next time I think I’ll try the “Tavern Smoked” Bison Burger. It was calling my name….

Oh, one more thing. I don’t want to get political, but I do think I should mention that I was seated across from a TV spewing Fox News throughout my entire meal, which is not exactly an appetizing sight. In my view, restaurateurs should save the openly biased “news” networks for home and tune the public TVs to ESPN or CNN or something else that won’t immediately alienate half of their customers. Being forced to watch Donald Trump expound on his political views is almost enough to make me reconsider a second visit to any restaurant.