Having a Morel of a Good Time 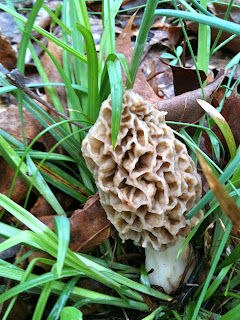 Readers of the blog might recall that I wrote about my Aunt Mary Ann’s Four-Layer Whiskey Cake last Christmas, even giving away the prized, secret recipe. I got a lot of good feedback on that post, so I’ve decided to periodically write about other family food traditions, too. For this week, I’ll be discussing that most elusive of all fungi – and a true Hoosier springtime rite of passage – the morel. 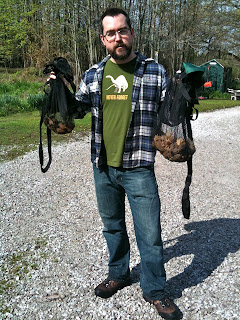 First off, just what are morels? Morels are hollow, edible mushrooms that feature a honeycomb-like upper portion on top of a smooth, white stem. There are a few different types of morels including black morels, yellow (or white) morels, and the small-top, long-stem “woodsies” (or, less politely, “peckerheads”). Some people (mainly my mom) also insist that there are gray morels, but I think those “gray” ones are really just lighter black morels. In Indiana, we usually start finding black morels in late March/early April. The white morels and woodsies start popping up a little later, in late April/early May. By mid-May, the crop of morels is gone for another year. The short harvest time is one reason why morels are so prized. The other reason they’re so prized is their flavor. If you’ve never eaten a morel, you’re really missing out. It’s hard to describe the unique taste – earthy and nutty and surprisingly meaty.

So, they taste good. But how do you clean and cook them, anyway? Simple! First off, make sure your mushrooms are fresh. If you’re not buying them in season or going out into the woods and finding them yourself, don’t even bother. Never buy those little expensive containers of dried morels at the supermarket! Yuck. Assuming you’ve got a mess (that’s what we always call a group of mushrooms, for some reason) of fresh morels, all you’ve got to do is clean and fry the little suckers. Simply slice them in half from top to bottom and briefly rinse each half in cold, running water to get any bugs or dirt out of them. Extensive washing or (God forbid) soaking the morels will just ruin them, so don’t go overboard with the water. 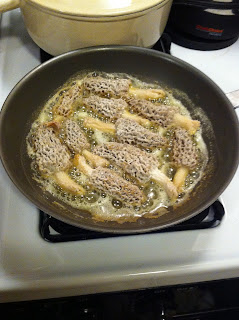 After you’ve halved and rinsed your morels, it’s time to do the cooking. My family believes in keeping this simple, so we just throw some flour, salt, and pepper in a bag and then toss the morels into that mixture, shaking them until they’re lightly covered. Next, we heat some olive oil and butter in a pan until it’s hot. Then we sauté the morels until they are crispy on the outside but not burnt. We usually eat our fried morels on their own or perhaps on some simple white bread. If we’re feeling adventurous, we might pair the mushrooms with eggs or eat them on top of a cheeseburger.
Posted by Corey Michael Dalton on 4/27/2011