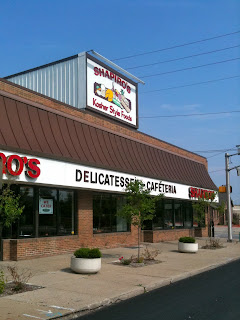 Shapiro’s Delicatessen is an Indianapolis tradition, an honest-to-goodness Jewish deli that’s been serving downtown Indy’s residents and workers excellent pastrami sandwiches and matzo ball soup for over a hundred years. And, even though all of those things are true, I never really enjoy eating there. It’s not the food’s fault – everything I’ve ever eaten there, I’ve liked – it’s more the atmosphere and staff that put me off.

Let me admit right up front that I am not a fan of cafeteria-style restaurants in general, so I’m already biased against Shapiro’s set-up. Cafeterias just feel like too much work to me; call me lazy, but I like having a host/hostess and a server. The concept of standing in a long line while keeping one eye on the dining room to make sure there are still empty tables stresses me out. On top of that, I often feel like I’m being ordered around or belittled by the Shapiro’s staff, which makes an already arduous process even more irritating. 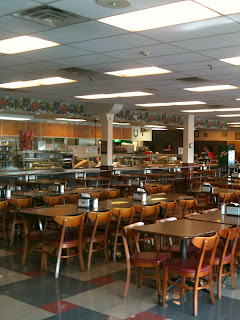 Case in point – lunch last Thursday. I agreed to meet one of my friends at Shapiro’s at 11:30. When we arrived, the line was already long – and growing. So, we got in it and waited patiently. As we finally approached the hot food area, I heard the familiar and forceful refrain of “Young man!” (which is how the guy behind the counter indirectly asks you what you’d like to order). I already had my deviled egg, so I just ordered half a pastrami-on-rye sandwich and a potato pancake. My friend, who was in line behind me, also ordered a half a pastrami on rye. For some reason, that set the guy behind the counter off. “Are you paying together?” he asked. “We could, I guess,” I stammered, a little confused. “Well, then you just cost yourself an extra four dollars by not ordering a whole sandwich and splitting it,” he said. I explained that I’d keep that in mind for next time, but he said I was being “stupid” and that I needed to give him back both plates. The old guy behind me (who had also been waiting in line a long time) gave an exaggerated sigh and crossed his arms as I handed both plates back over the counter. A few seconds later, the fellow behind the counter put a whole sandwich up. I started to grab it, but he yelled, “Don’t touch that! That’s for the man behind you.” The old man grabbed the sandwich and shoved by me. Finally, I got my actual sandwich – along with a stern look. Now, I know that the Shapiro’s guy was just trying to be helpful and save me a few bucks, but I ended up feeling like I had been reprimanded.

But enough about that. The food was excellent despite my stewing. Both my friend and I devoured our sandwiches, loving the mounded-up pastrami and the spicy mustard. The potato pancake would have been better with a little applesauce (I guess you have to order that separately?), but that didn’t stop me from eating the whole thing. And the deviled eggs are the best in Indy. From past experiences, I know that they also have great desserts at Shapiro’s. The various types of cheesecakes are universally good, and the black and white cookie always makes a tasty treat.

So, as I said, the food at Shapiro’s is good. And that should be what a restaurant’s all about, right? Well, not quite. Because I don’t enjoy the experience of eating at Shapiro’s, I don’t go there very often. Every once in a while, though, my craving for a pastrami sandwich with mustard and Swiss cheese overrides my dislike of the process. The fact that I’m willing to deal with an irritating set-up and mild abuse from the restaurant’s employees must say something good about the food, right?